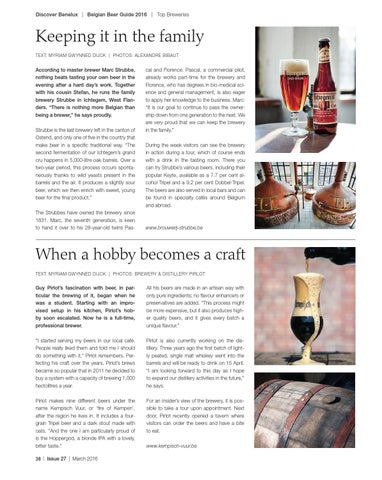 According to master brewer Marc Strubbe, nothing beats tasting your own beer in the evening after a hard day’s work. Together with his cousin Stefan, he runs the family brewery Strubbe in Ichtegem, West Flanders. “There is nothing more Belgian than being a brewer,” he says proudly. Strubbe is the last brewery left in the canton of Ostend, and only one of five in the country that make beer in a specific traditional way. “The second fermentation of our Ichtegem’s grand cru happens in 5,000-litre oak barrels. Over a two-year period, this process occurs spontaneously thanks to wild yeasts present in the barrels and the air. It produces a slightly sour beer, which we then enrich with sweet, young beer for the final product.” The Strubbes have owned the brewery since 1831. Marc, the seventh generation, is keen to hand it over to his 28-year-old twins Pas-

cal and Florence. Pascal, a commercial pilot, already works part-time for the brewery and Florence, who has degrees in bio-medical science and general management, is also eager to apply her knowledge to the business. Marc: “It is our goal to continue to pass the ownership down from one generation to the next. We are very proud that we can keep the brewery in the family.” During the week visitors can see the brewery in action during a tour, which of course ends with a drink in the tasting room. There you can try Strubbe’s various beers, including their popular Keyte, available as a 7.7 per cent alcohol Tripel and a 9.2 per cent Dobbel-Tripel. The beers are also served in local bars and can be found in specialty cafés around Belgium and abroad.

Guy Pirlot’s fascination with beer, in particular the brewing of it, began when he was a student. Starting with an improvised setup in his kitchen, Pirlot’s hobby soon escalated. Now he is a full-time, professional brewer.

All his beers are made in an artisan way with only pure ingredients; no flavour enhancers or preservatives are added. “This process might be more expensive, but it also produces higher quality beers, and it gives every batch a unique flavour.”

“I started serving my beers in our local café. People really liked them and told me I should do something with it,” Pirlot remembers. Perfecting his craft over the years, Pirlot’s brews became so popular that in 2011 he decided to buy a system with a capacity of brewing 1,000 hectolitres a year.

Pirlot is also currently working on the distillery. Three years ago the first batch of lightly peated, single malt whiskey went into the barrels and will be ready to drink on 15 April. “I am looking forward to this day as I hope to expand our distillery activities in the future,” he says.

Pirlot makes nine different beers under the name Kempisch Vuur, or ‘fire of Kempen’, after the region he lives in. It includes a fourgrain Tripel beer and a dark stout made with oats. “And the one I am particularly proud of is the Hoppergod, a blonde IPA with a lovely, bitter taste.”

For an insider’s view of the brewery, it is possible to take a tour upon appointment. Next door, Pirlot recently opened a tavern where visitors can order the beers and have a bite to eat.