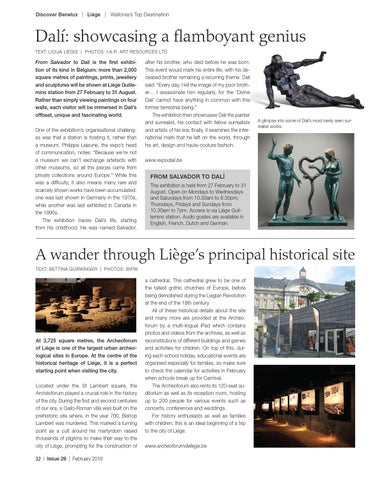 From Salvador to Dalí is the first exhibition of its kind in Belgium: more than 2,000 square metres of paintings, prints, jewellery and sculptures will be shown at Liège Guillemins station from 27 February to 31 August. Rather than simply viewing paintings on four walls, each visitor will be immersed in Dalí’s offbeat, unique and fascinating world. One of the exhibition’s organisational challenges was that a station is hosting it, rather than a museum. Philippe Lejeune, the expo’s head of communication, notes: “Because we’re not a museum we can’t exchange artefacts with other museums, so all the pieces came from private collections around Europe.” While this was a difficulty, it also means many rare and scarcely shown works have been accumulated: one was last shown in Germany in the 1970s, while another was last exhibited in Canada in the 1990s. The exhibition traces Dalí’s life, starting from his childhood. He was named Salvador,

after his brother, who died before he was born. This event would mark his entire life, with his deceased brother remaining a recurring theme. Dalí said: “Every day, I kill the image of my poor brother… I assassinate him regularly, for the ‘Divine Dali’ cannot have anything in common with this former terrestrial being.” The exhibition then showcases Dalí the painter and surrealist, his contact with fellow surrealists and artists of his era; finally, it examines the international mark that he left on the world, through his art, design and haute couture fashion.

A glimpse into some of Dalí’s most rarely seen surrealist works.

FROM SALVADOR TO DALÍ The exhibition is held from 27 February to 31 August. Open on Mondays to Wednesdays and Saturdays from 10.30am to 8.30pm; Thursdays, Fridays and Sundays from 10.30am to 7pm. Access is via Liège Guillemins station. Audio guides are available in English, French, Dutch and German.

At 3,725 square metres, the Archeoforum of Liège is one of the largest urban archeological sites in Europe. At the centre of the historical heritage of Liège, it is a perfect starting point when visiting the city. Located under the St Lambert square, the Archéoforum played a crucial role in the history of the city. During the first and second centuries of our era, a Gallo-Roman villa was built on the prehistoric site where, in the year 700, Bishop Lambert was murdered. This marked a turning point as a cult around his martyrdom raised thousands of pilgrims to make their way to the city of Liège, prompting for the construction of 32 | Issue 26 | February 2016

a cathedral. This cathedral grew to be one of the tallest gothic churches of Europe, before being demolished during the Liegian Revolution at the end of the 18th century. All of these historical details about the site and many more are provided at the Archéoforum by a multi-lingual iPad which contains photos and videos from the archives, as well as reconstitutions of different buildings and games and activities for children. On top of this, during each school holiday, educational events are organised especially for families, so make sure to check the calendar for activities in February when schools break up for Carnival. The Archéoforum also rents its 120-seat auditorium as well as its reception room, hosting up to 200 people for various events such as concerts, conferences and weddings. For history enthusiasts as well as families with children, this is an ideal beginning of a trip to the city of Liège. www.archeoforumdeliege.be