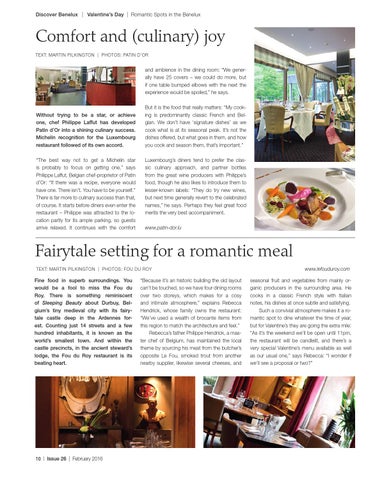 and ambience in the dining room: “We generally have 25 covers – we could do more, but if one table bumped elbows with the next the experience would be spoiled,” he says.

Without trying to be a star, or achieve one, chef Philippe Laffut has developed Patin d’Or into a shining culinary success. Michelin recognition for the Luxembourg restaurant followed of its own accord. “The best way not to get a Michelin star is probably to focus on getting one,” says Philippe Laffut, Belgian chef-proprietor of Patin d’Or: “If there was a recipe, everyone would have one. There isn’t. You have to be yourself.” There is far more to culinary success than that, of course. It starts before diners even enter the restaurant – Philippe was attracted to the location partly for its ample parking, so guests arrive relaxed. It continues with the comfort

But it is the food that really matters: “My cooking is predominantly classic French and Belgian. We don’t have ‘signature dishes’ as we cook what is at its seasonal peak. It’s not the dishes offered, but what goes in them, and how you cook and season them, that’s important.” Luxembourg’s diners tend to prefer the classic culinary approach, and partner bottles from the great wine producers with Philippe’s food, though he also likes to introduce them to lesser-known labels: “They do try new wines, but next time generally revert to the celebrated names,” he says. Perhaps they feel great food merits the very best accompaniment. www.patin-dor.lu

Fine food in superb surroundings. You would be a fool to miss the Fou du Roy. There is something reminiscent of Sleeping Beauty about Durbuy, Belgium’s tiny medieval city with its fairytale castle deep in the Ardennes forest. Counting just 14 streets and a few hundred inhabitants, it is known as the world’s smallest town. And within the castle precincts, in the ancient steward’s lodge, the Fou du Roy restaurant is its beating heart.

“Because it’s an historic building the old layout can’t be touched, so we have four dining rooms over two storeys, which makes for a cosy and intimate atmosphere,” explains Rebecca Hendrick, whose family owns the restaurant: “We’ve used a wealth of brocante items from this region to match the architecture and feel.” Rebecca’s father Philippe Hendrick, a master chef of Belgium, has maintained the local theme by sourcing his meat from the butcher’s opposite Le Fou, smoked trout from another nearby supplier, likewise several cheeses, and

www.lefouduroy.com seasonal fruit and vegetables from mainly organic producers in the surrounding area. He cooks in a classic French style with Italian notes, his dishes at once subtle and satisfying. Such a convivial atmosphere makes it a romantic spot to dine whatever the time of year, but for Valentine’s they are going the extra mile: “As it’s the weekend we’ll be open until 11pm, the restaurant will be candlelit, and there’s a very special Valentine’s menu available as well as our usual one,” says Rebecca: “I wonder if we’ll see a proposal or two?”