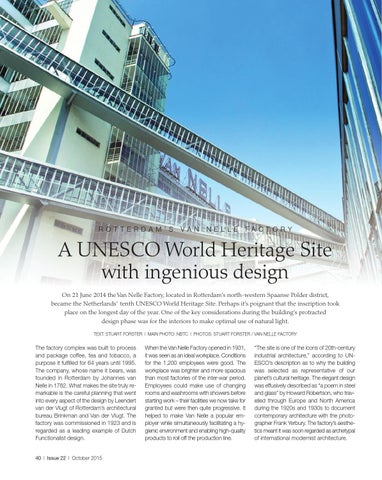 The factory complex was built to process and package coffee, tea and tobacco, a purpose it fulfilled for 64 years until 1995. The company, whose name it bears, was founded in Rotterdam by Johannes van Nelle in 1782. What makes the site truly remarkable is the careful planning that went into every aspect of the design by Leendert van der Vlugt of Rotterdam’s architectural bureau Brinkman and Van der Vlugt. The factory was commissioned in 1923 and is regarded as a leading example of Dutch Functionalist design.

When the Van Nelle Factory opened in 1931, it was seen as an ideal workplace. Conditions for the 1,200 employees were good. The workplace was brighter and more spacious than most factories of the inter-war period. Employees could make use of changing rooms and washrooms with showers before starting work – their facilities we now take for granted but were then quite progressive. It helped to make Van Nelle a popular employer while simultaneously facilitating a hygienic environment and enabling high-quality products to roll off the production line.

“The site is one of the icons of 20th-century industrial architecture,” according to UNESCO’s description as to why the building was selected as representative of our planet’s cultural heritage. The elegant design was effusively described as “a poem in steel and glass” by Howard Robertson, who travelled through Europe and North America during the 1920s and 1930s to document contemporary architecture with the photographer Frank Yerbury. The factory’s aesthetics meant it was soon regarded as archetypal of international modernist architecture.