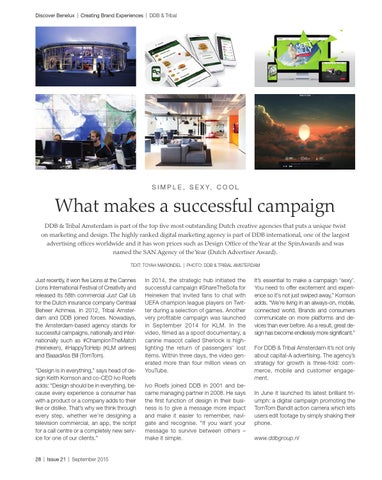 What makes a successful campaign DDB &amp; Tribal Amsterdam is part of the top five most outstanding Dutch creative agencies that puts a unique twist on marketing and design. The highly ranked digital marketing agency is part of DDB international, one of the largest advertising offices worldwide and it has won prices such as Design Office of the Year at the SpinAwards and was named the SAN Agency of the Year (Dutch Advertiser Award). TEXT: TOYAH MARONDEL | PHOTO: DDB &amp; TRIBAL AMSTERDAM

Just recently, it won five Lions at the Cannes Lions International Festival of Creativity and released its 58th commercial Just Call Us for the Dutch insurance company Centraal Beheer Achmea. In 2012, Tribal Amsterdam and DDB joined forces. Nowadays, the Amsterdam-based agency stands for successful campaigns, nationally and internationally such as #ChampionTheMatch (Heineken), #HappyToHelp (KLM airlines) and BaaadAss Bill (TomTom). “Design is in everything,” says head of design Keith Kornson and co-CEO Ivo Roefs adds: “Design should be in everything, because every experience a consumer has with a product or a company adds to their like or dislike. That’s why we think through every step, whether we’re designing a television commercial, an app, the script for a call centre or a completely new service for one of our clients.”

In 2014, the strategic hub initiated the successful campaign #ShareTheSofa for Heineken that invited fans to chat with UEFA champion league players on Twitter during a selection of games. Another very profitable campaign was launched in September 2014 for KLM. In the video, filmed as a spoof documentary, a canine mascot called Sherlock is highlighting the return of passengers’ lost items. Within three days, the video generated more than four million views on YouTube. Ivo Roefs joined DDB in 2001 and became managing partner in 2008. He says the first function of design in their business is to give a message more impact and make it easier to remember, navigate and recognise. “If you want your message to survive between others – make it simple.

It’s essential to make a campaign ‘sexy’. You need to offer excitement and experience so it&#39;s not just swiped away,” Kornson adds. “We’re living in an always-on, mobile, connected world. Brands and consumers communicate on more platforms and devices than ever before. As a result, great design has become endlessly more significant.” For DDB &amp; Tribal Amsterdam it’s not only about capital-A advertising. The agency’s strategy for growth is three-fold: commerce, mobile and customer engagement. In June it launched its latest brilliant triumph: a digital campaign promoting the TomTom Bandit action camera which lets users edit footage by simply shaking their phone. www.ddbgroup.nl