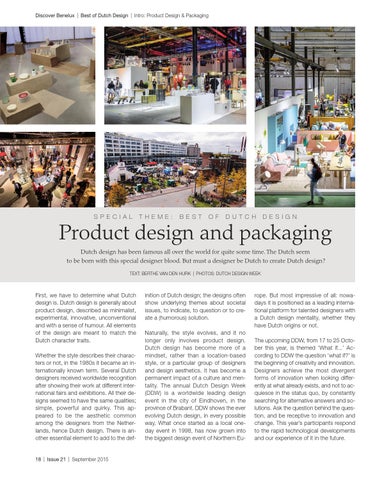 Product design and packaging Dutch design has been famous all over the world for quite some time. The Dutch seem to be born with this special designer blood. But must a designer be Dutch to create Dutch design? TEXT: BERTHE VAN DEN HURK | PHOTOS: DUTCH DESIGN WEEK

First, we have to determine what Dutch design is. Dutch design is generally about product design, described as minimalist, experimental, innovative, unconventional and with a sense of humour. All elements of the design are meant to match the Dutch character traits. Whether the style describes their characters or not, in the 1980s it became an internationally known term. Several Dutch designers received worldwide recognition after showing their work at different international fairs and exhibitions. All their designs seemed to have the same qualities; simple, powerful and quirky. This appeared to be the aesthetic common among the designers from the Netherlands, hence Dutch design. There is another essential element to add to the def-

inition of Dutch design; the designs often show underlying themes about societal issues, to indicate, to question or to create a (humorous) solution. Naturally, the style evolves, and it no longer only involves product design. Dutch design has become more of a mindset, rather than a location-based style, or a particular group of designers and design aesthetics. It has become a permanent impact of a culture and mentality. The annual Dutch Design Week (DDW) is a worldwide leading design event in the city of Eindhoven, in the province of Brabant. DDW shows the ever evolving Dutch design, in every possible way. What once started as a local oneday event in 1998, has now grown into the biggest design event of Northern Eu-

rope. But most impressive of all: nowadays it is positioned as a leading international platform for talented designers with a Dutch design mentality, whether they have Dutch origins or not. The upcoming DDW, from 17 to 25 October this year, is themed ‘What if...’ According to DDW the question ‘what if?’ is the beginning of creativity and innovation. Designers achieve the most divergent forms of innovation when looking differently at what already exists, and not to acquiesce in the status quo, by constantly searching for alternative answers and solutions. Ask the question behind the question, and be receptive to innovation and change. This year’s participants respond to the rapid technological developments and our experience of it in the future.