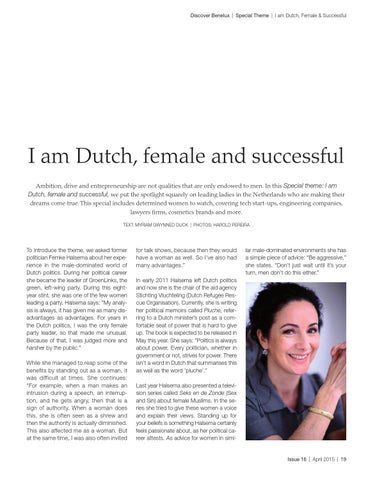 I am Dutch, female and successful Ambition, drive and entrepreneurship are not qualities that are only endowed to men. In this Special theme: I am Dutch, female and successful, we put the spotlight squarely on leading ladies in the Netherlands who are making their dreams come true. This special includes determined women to watch, covering tech start-ups, engineering companies, lawyers firms, cosmetics brands and more. TEXT: MYRIAM GWYNNED DIJCK | PHOTOS: HAROLD PEREIRA

To introduce the theme, we asked former politician Femke Halsema about her experience in the male-dominated world of Dutch politics. During her political career she became the leader of GroenLinks, the green, left-wing party. During this eightyear stint, she was one of the few women leading a party. Halsema says: “My analysis is always, it has given me as many disadvantages as advantages. For years in the Dutch politics, I was the only female party leader, so that made me unusual. Because of that, I was judged more and harsher by the public.” While she managed to reap some of the benefits by standing out as a woman, it was difficult at times. She continues: “For example, when a man makes an intrusion during a speech, an interruption, and he gets angry, then that is a sign of authority. When a woman does this, she is often seen as a shrew and then the authority is actually diminished. This also affected me as a woman. But at the same time, I was also often invited

for talk shows, because then they would have a woman as well. So I’ve also had many advantages.”

lar male-dominated environments she has a simple piece of advice: “Be aggressive,” she states. “Don’t just wait until it’s your turn, men don’t do this either.”

In early 2011 Halsema left Dutch politics and now she is the chair of the aid agency Stichting vluchteling (Dutch Refugee Rescue Organisation). Currently, she is writing her political memoirs called Pluche, referring to a Dutch minister’s post as a comfortable seat of power that is hard to give up. The book is expected to be released in May this year. She says: “Politics is always about power. Every politician, whether in government or not, strives for power. There isn’t a word in Dutch that summarises this as well as the word ‘pluche’.” Last year Halsema also presented a television series called Seks en de Zonde (Sex and Sin) about female Muslims. In the series she tried to give these women a voice and explain their views. Standing up for your beliefs is something Halsema certainly feels passionate about, as her political career attests. As advice for women in simi-