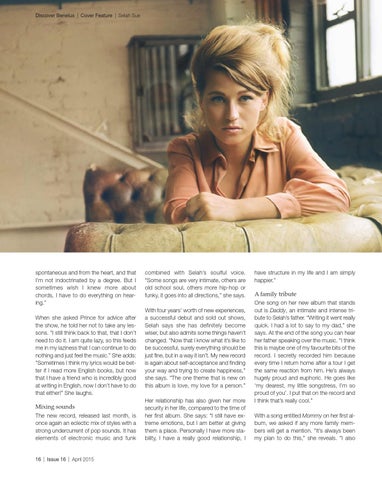 spontaneous and from the heart, and that I’m not indoctrinated by a degree. But I sometimes wish I knew more about chords, I have to do everything on hearing.” When she asked Prince for advice after the show, he told her not to take any lessons. “I still think back to that, that I don’t need to do it. I am quite lazy, so this feeds me in my laziness that I can continue to do nothing and just feel the music.” She adds: “Sometimes I think my lyrics would be better if I read more English books, but now that I have a friend who is incredibly good at writing in English, now I don’t have to do that either!” She laughs.

Mixing sounds The new record, released last month, is once again an eclectic mix of styles with a strong undercurrent of pop sounds. It has elements of electronic music and funk

combined with Selah’s soulful voice. “Some songs are very intimate, others are old school soul, others more hip-hop or funky, it goes into all directions,” she says. With four years’ worth of new experiences, a successful debut and sold out shows, Selah says she has definitely become wiser, but also admits some things haven’t changed. “Now that I know what it’s like to be successful, surely everything should be just fine, but in a way it isn’t. My new record is again about self-acceptance and finding your way and trying to create happiness,” she says. “The one theme that is new on this album is love, my love for a person.” Her relationship has also given her more security in her life, compared to the time of her first album. She says: “I still have extreme emotions, but I am better at giving them a place. Personally I have more stability, I have a really good relationship, I

have structure in my life and I am simply happier.”

A family tribute One song on her new album that stands out is Daddy, an intimate and intense tribute to Selah’s father. “Writing it went really quick. I had a lot to say to my dad,” she says. At the end of the song you can hear her father speaking over the music. “I think this is maybe one of my favourite bits of the record. I secretly recorded him because every time I return home after a tour I get the same reaction from him. He’s always hugely proud and euphoric. He goes like ‘my dearest, my little songstress, I’m so proud of you’. I put that on the record and I think that’s really cool.” With a song entitled Mommy on her first album, we asked if any more family members will get a mention. “It’s always been my plan to do this,” she reveals. “I also