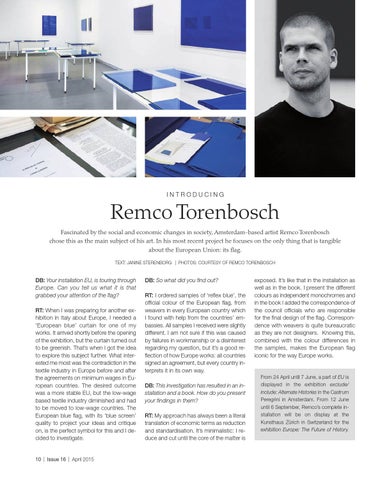 Remco Torenbosch Fascinated by the social and economic changes in society, Amsterdam-based artist Remco Torenbosch chose this as the main subject of his art. In his most recent project he focuses on the only thing that is tangible about the European Union: its flag. TEXT: JANINE STERENBORG | PHOTOS: COURTESY OF REMCO TORENBOSCH

DB: Your installation EU, is touring through Europe. Can you tell us what it is that grabbed your attention of the flag? RT: When I was preparing for another exhibition in Italy about Europe, I needed a ‘European blue’ curtain for one of my works. It arrived shortly before the opening of the exhibition, but the curtain turned out to be greenish. That’s when I got the idea to explore this subject further. What interested me most was the contradiction in the textile industry in Europe before and after the agreements on minimum wages in European countries. The desired outcome was a more stable EU, but the low-wage based textile industry diminished and had to be moved to low-wage countries. The European blue flag, with its ‘blue screen’ quality to project your ideas and critique on, is the perfect symbol for this and I decided to investigate.

DB: So what did you find out? RT: I ordered samples of ‘reflex blue’, the official colour of the European flag, from weavers in every European country which I found with help from the countries’ embassies. All samples I received were slightly different. I am not sure if this was caused by failures in workmanship or a disinterest regarding my question, but it’s a good reflection of how Europe works: all countries signed an agreement, but every country interprets it in its own way. DB: This investigation has resulted in an installation and a book. How do you present your findings in them? RT: My approach has always been a literal translation of economic terms as reduction and standardisation. It’s minimalistic: I reduce and cut until the core of the matter is

exposed. It’s like that in the installation as well as in the book. I present the different colours as independent monochromes and in the book I added the correspondence of the council officials who are responsible for the final design of the flag. Correspondence with weavers is quite bureaucratic as they are not designers. Knowing this, combined with the colour differences in the samples, makes the European flag iconic for the way Europe works.

From 24 April until 7 June, a part of EU is displayed in the exhibition exclude/ include: Alternate Histories in the Castrum Peregrini in Amsterdam. From 12 June until 6 September, Remco’s complete installation will be on display at the Kunsthaus Zürich in Switzerland for the exhibition Europe: The Future of History.