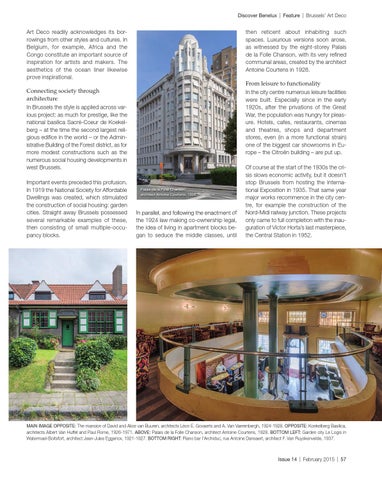 then  reticent  about  inhabiting  such spaces.  Luxurious  versions  soon  arose, as  witnessed  by  the  eight-storey  Palais de la Folle Chanson, with its very refined communal areas, created by the architect Antoine Courtens in 1928.

Art  Deco  readily  acknowledges  its  borrowings from other styles and cultures. In Belgium,  for  example,  Africa  and  the Congo constitute an important source of inspiration  for  artists  and  makers.  The aesthetics  of  the  ocean  liner  likewise prove inspirational.

From leisure to functionality Connecting society through architecture

In the city centre numerous leisure facilities were  built.  Especially  since  in  the  early 1920s,  after  the  privations  of  the  Great War, the population was hungry for pleasure.  Hotels,  cafes,  restaurants,  cinemas and  theatres,  shops  and  department stores,  even  (in  a  more  functional  strain) one of the biggest car showrooms in Europe – the Citroën building – are put up.

In Brussels the style is applied across various project: as much for prestige, like the national basilica Sacré-Coeur de Koekelberg – at the time the second largest religious edifice in the world – or the Administrative Building of the Forest district, as for more  modest  constructions  such  as  the numerous social housing developments in west Brussels.  Important events preceded this profusion. In 1919 the National Society for Affordable Dwellings  was  created,  which  stimulated the construction of social housing: garden cities. Straight away Brussels possessed several  remarkable  examples  of  these, then  consisting  of  small  multiple-occupancy blocks.

In parallel, and following the enactment of the 1924 law making co-ownership legal, the idea of living in apartment blocks began  to  seduce  the  middle  classes,  until

Of course at the start of the 1930s the crisis slows economic activity, but it doesn’t stop  Brussels  from  hosting  the  International Exposition in 1935. That same year major works recommence in the city centre,  for  example  the  construction  of  the Nord-Midi railway junction. These projects only came to full completion with the inauguration of Victor Horta’s last masterpiece, the Central Station in 1952.