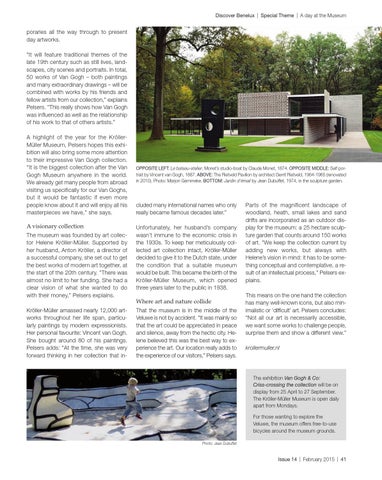 poraries  all  the  way  through  to  present day artworks. “It  will  feature  traditional  themes  of  the late 19th century such as still lives, landscapes, city scenes and portraits. In total, 50  works  of  Van  Gogh  –  both  paintings and many extraordinary drawings – will be combined with works by his friends and fellow artists from our collection,” explains Pelsers. “This really shows how Van Gogh was influenced as well as the relationship of his work to that of others artists.” A  highlight  of  the  year  for  the  KröllerMüller Museum, Pelsers hopes this exhibition will also bring some more attention to their impressive Van Gogh collection. “It is the biggest collection after the Van Gogh  Museum  anywhere  in  the  world. We already get many people from abroad visiting us specifically for our Van Goghs, but  it  would  be  fantastic  if  even  more people know about it and will enjoy all his masterpieces we have,” she says.

A visionary collection The museum was founded by art collector  Helene  Kröller-Müller.  Supported  by her husband, Anton Kröller, a director of a successful company, she set out to get the best works of modern art together, at the start of the 20th century. “There was almost no limit to her funding. She had a clear  vision  of  what  she  wanted  to  do with their money,” Pelsers explains.

OPPOSITE LEFT: Le bateau-atelier, Monet’s studio-boat by Claude Monet, 1874. OPPOSITE MIDDLE: Self portrait by Vincent van Gogh, 1887. ABOVE: The Rietveld Pavilion by architect Gerrit Rietveld, 1964-1965 (renovated in 2010). Photo: Marjon Gemmeke. BOTTOM: Jardin d’émail by Jean Dubuffet, 1974, in the sculpture garden.

cluded many international names who only really became famous decades later.” Unfortunately,  her  husband’s  company wasn’t immune to the economic crisis in the 1930s. To keep her meticulously collected  art  collection  intact,  Kröller-Müller decided to give it to the Dutch state, under the  condition  that  a  suitable  museum would be built. This became the birth of the Kröller-Müller  Museum,  which  opened three years later to the public in 1938.

Where art and nature collide Kröller-Müller amassed nearly 12,000 artworks  throughout  her  life  span,  particularly  paintings  by  modern  expressionists. Her personal favourite: Vincent van Gogh. She  bought  around  80  of  his  paintings. Pelsers adds: “At the time, she was very forward  thinking  in  her  collection  that  in-

That  the  museum  is  in  the  middle  of  the Veluwe is not by accident. “It was mainly so that the art could be appreciated in peace and silence, away from the hectic city. Helene believed this was the best way to experience the art. Our location really adds to the experience of our visitors,” Pelsers says.

Parts  of  the  magnificent  landscape  of woodland,  heath,  small  lakes  and  sand drifts are incorporated as an outdoor display for the museum: a 25 hectare sculpture garden that counts around 150 works of art. “We keep the collection current by adding  new  works,  but  always  with  Helene’s vision in mind: it has to be something conceptual and contemplative, a result of an intellectual process,” Pelsers explains. This means on the one hand the collection has many well-known icons, but also minimalistic or ‘difficult’ art. Pelsers concludes: “Not  all  our  art  is  necessarily  accessible, we want some works to challenge people, surprise them and show a different view.” krollermuller.nl

The exhibition Van Gogh & Co: Criss-crossing the collection will be on display from 25 April to 27 September. The Kröller-Müller Museum is open daily apart from Mondays. For those wanting to explore the Veluwe, the museum offers free-to-use bicycles around the museum grounds. Photo: Jean Dubuffet