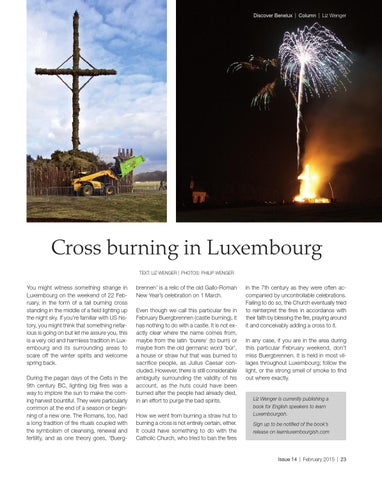 You  might  witness  something  strange  in Luxembourg on the weekend of 22 February,  in  the  form  of  a  tall  burning  cross standing in the middle of a field lighting up the night sky. If you’re familiar with US history, you might think that something nefarious is going on but let me assure you, this is a very old and harmless tradition in Luxembourg  and  its  surrounding  areas  to scare  off  the  winter  spirits  and  welcome spring back. During the pagan days of the Celts in the 9th  century  BC,  lighting  big  fires  was  a way to implore the sun to make the coming harvest bountiful. They were particularly common at the end of a season or beginning of a new one. The Romans, too, had a long tradition of fire rituals coupled with the symbolism of cleansing, renewal and fertility,  and  as  one  theory  goes,  ‘Buerg-

brennen’ is a relic of the old Gallo-Roman New Year’s celebration on 1 March. Even though we call this particular fire in February Buergbrennen (castle burning), it has nothing to do with a castle. It is not exactly  clear  where  the  name  comes  from, maybe from the latin ‘burere’ (to burn) or maybe from the old germanic word ‘bûr’, a house or straw hut that was burned to sacrifice  people,  as  Julius  Caesar  concluded. However, there is still considerable ambiguity  surrounding  the  validity  of  his account,  as  the  huts  could  have  been burned after the people had already died, in an effort to purge the bad spirits. How we went from burning a straw hut to burning a cross is not entirely certain, either. It  could  have  something  to  do  with  the Catholic Church, who tried to ban the fires

in  the  7th  century  as  they  were  often  accompanied by uncontrollable celebrations. Failing to do so, the Church eventually tried to  reinterpret  the  fires  in  accordance  with their faith by blessing the fire, praying around it and conceivably adding a cross to it. In any case, if you are in the area during this  particular  February  weekend,  don’t miss Buergbrennen. It is held in most villages throughout Luxembourg; follow the light, or the strong smell of smoke to find out where exactly.

Liz Wenger is currently publishing a book for English speakers to learn Luxembourgish. Sign up to be notified of the book’s release on learnluxembourgish.com