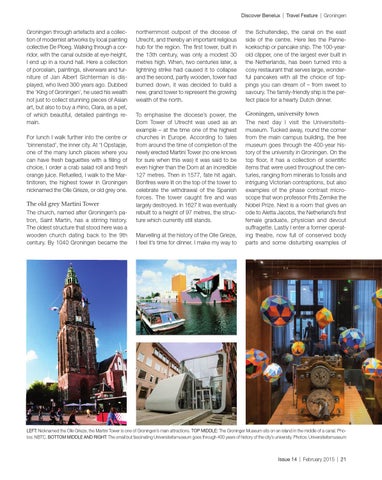 Groningen through artefacts and a collection of modernist artworks by local painting collective De Ploeg. Walking through a corridor, with the canal outside at eye-height, I end up in a round hall. Here a collection of porcelain, paintings, silverware and furniture  of  Jan  Albert  Sichterman  is  displayed, who lived 300 years ago. Dubbed the ‘King of Groningen’, he used his wealth not just to collect stunning pieces of Asian art, but also to buy a rhino, Clara, as a pet, of  which  beautiful,  detailed  paintings  remain. For lunch I walk further into the centre or ‘binnenstad’, the inner city. At ‘t Opstapje, one of the many lunch places where you can  have  fresh  baguettes  with  a  filling  of choice, I order a crab salad roll and fresh orange juice. Refuelled, I walk to the Martinitoren,  the  highest  tower  in  Groningen nicknamed the Olle Grieze, or old grey one.

The old grey Martini Tower The church, named after Groningen’s patron,  Saint  Martin,  has  a  stirring  history. The oldest structure that stood here was a wooden  church  dating  back  to  the  9th century. By 1040 Groningen became the

northernmost  outpost  of  the  diocese  of Utrecht, and thereby an important religious hub for the region. The first tower, built in the  13th  century,  was  only  a  modest  30 metres high. When, two centuries later, a lightning  strike  had  caused  it  to  collapse and the second, partly wooden, tower had burned  down,  it  was  decided  to  build  a new, grand tower to represent the growing wealth of the north.

the  Schuitendiep,  the  canal  on  the  east side  of  the  centre.  Here  lies  the  Panne koekschip or pancake ship. The 100-yearold clipper, one of the largest ever built in the  Netherlands,  has  been  turned  into  a cosy restaurant that serves large, wonderful  pancakes  with  all  the  choice  of  toppings you can dream of – from sweet to savoury. The family-friendly ship is the perfect place for a hearty Dutch dinner.

To  emphasise  the  diocese’s  power,  the Dom  Tower  of  Utrecht  was  used  as  an  example – at the time one of the highest churches  in  Europe.  According  to  tales from around the time of completion of the newly erected Martini Tower (no one knows for sure when this was) it was said to be even higher than the Dom at an incredible 127 metres. Then in 1577, fate hit again. Bonfires were lit on the top of the tower to celebrate  the  withdrawal  of  the  Spanish forces.  The  tower  caught  fire  and  was largely destroyed. In 1627 it was eventually rebuilt to a height of 97 metres, the structure which currently still stands.

Marvelling at the history of the Olle Grieze, I feel it’s time for dinner. I make my way to

The  next  day  I  visit  the   Universiteits museum. Tucked away, round the corner from  the  main  campus  building,  the  free museum goes through the 400-year history of the university in Groningen. On the top  floor,  it  has  a  collection  of  scientific items that were used throughout the centuries, ranging from minerals to fossils and intriguing Victorian contraptions, but also examples  of  the  phase  contrast  microscope that won professor Frits Zernike the Nobel Prize. Next is a room that gives an ode to Aletta Jacobs, the Netherland’s first female  graduate,  physician  and  devout suffragette. Lastly I enter a former operating  theatre,  now  full  of  conserved  body parts  and  some  disturbing  examples  of

LEFT: Nicknamed the Olle Grieze, the Martini Tower is one of Groningen’s main attractions. TOP MIDDLE: The Groninger Museum sits on an island in the middle of a canal. Photos: NBTC. BOTTOM MIDDLE AND RIGHT: The small but fascinating Universiteitsmuseum goes through 400 years of history of the city’s university. Photos: Universiteitsmuseum