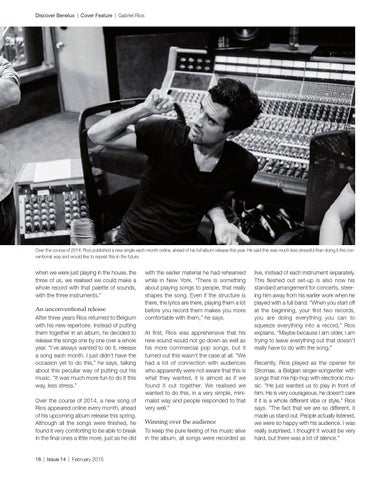 Over the course of 2014, Rios published a new single each month online, ahead of his full album release this year. He said this was much less stressful than doing it the conventional way and would like to repeat this in the future.

when we were just playing in the house, the three of us, we realised we could make a whole record with that palette of sounds, with the three instruments.”

An unconventional release After three years Rios returned to Belgium with his new repertoire. Instead of putting them together in an album, he decided to release the songs one by one over a whole year. “I’ve always wanted to do it, release a song each month. I just didn’t have the occasion yet to do this,” he says, talking about this peculiar way of putting out his music. “It was much more fun to do it this way, less stress.” Over the course of 2014, a new song of Rios appeared online every month, ahead of his upcoming album release this spring. Although  all  the  songs  were  finished,  he found it very comforting to be able to break in the final ones a little more, just as he did

with the earlier material he had rehearsed while  in  New  York.  “There  is  something about playing songs to people, that really shapes the song. Even if the structure is there, the lyrics are there, playing them a lot before you record them makes you more comfortable with them,” he says. At  first,  Rios  was  apprehensive  that  his new sound would not go down as well as his  more  commercial  pop  songs,  but  it turned out this wasn’t the case at all. “We had  a  lot  of  connection  with  audiences who apparently were not aware that this is what  they  wanted,  it  is  almost  as  if  we found  it  out  together.  We  realised  we wanted to do this, in a very simple, minimalist way and people responded to that very well.”

Winning over the audience To keep the pure feeling of his music alive in the album, all songs were recorded as

live, instead of each instrument separately. This  fleshed  out  set-up  is  also  now  his standard arrangement for concerts, steering him away from his earlier work when he played with a full band. “When you start off at  the  beginning,  your  first  two  records, you  are  doing  everything  you  can  to squeeze  everything  into  a  record,”  Rios explains. “Maybe because I am older, I am trying to leave everything out that doesn’t really have to do with the song.” Recently,  Rios  played  as  the  opener  for Stromae, a Belgian singer-songwriter with songs that mix hip-hop with electronic music. “He just wanted us to play in front of him. He is very courageous, he doesn’t care if it is a whole different vibe or style,” Rios says. “The fact that we are so different, it made us stand out. People actually listened, we were so happy with his audience. I was really surprised, I thought it would be very hard, but there was a lot of silence.”