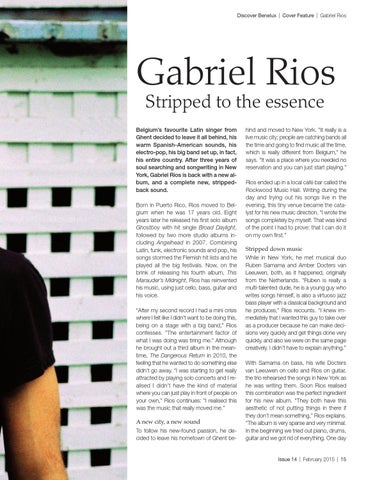 Gabriel Rios Stripped to the essence

Belgium’s favourite Latin singer from Ghent decided to leave it all behind, his warm Spanish-American sounds, his electro-pop, his big band set up, in fact, his entire country. After three years of soul searching and songwriting in New York, Gabriel Rios is back with a new album, and a complete new, strippedback sound. Born in Puerto Rico, Rios moved to Belgium  when  he  was  17  years  old.  Eight years later he released his first solo album Ghostboy with  hit  single  Broad Daylight, followed  by  two  more  studio  albums  including  Angelhead in  2007.  Combining Latin, funk, electronic sounds and pop, his songs stormed the Flemish hit lists and he played  all  the  big  festivals.  Now,  on  the brink  of  releasing  his  fourth  album,  This Marauder’s Midnight, Rios has reinvented his music, using just cello, bass, guitar and his voice. “After my second record I had a mini crisis where I felt like I didn’t want to be doing this, being  on  a  stage  with  a  big  band,”  Rios confesses.  “The  entertainment  factor  of what I was doing was tiring me.” Although he brought out a third album in the meantime,  The Dangerous Return in  2010,  the feeling that he wanted to do something else didn’t go away. “I was starting to get really attracted by playing solo concerts and I realised  I  didn’t  have  the  kind  of  material where you can just play in front of people on your own,” Rios continues: “I realised this was the music that really moved me.”

A new city, a new sound To  follow  his  new-found  passion,  he  decided to leave his hometown of Ghent be-

hind and moved to New York. “It really is a live music city; people are catching bands all the time and going to find music all the time, which  is  really  different  from  Belgium,”  he says. “It was a place where you needed no reservation and you can just start playing.” Rios ended up in a local café bar called the Rockwood Music Hall. Writing during the day  and  trying  out  his  songs  live  in  the evening, this tiny venue became the catalyst for his new music direction. “I wrote the songs completely by myself. That was kind of the point I had to prove: that I can do it on my own first.”

Stripped down music While  in  New  York,  he  met  musical  duo Ruben  Samama  and  Amber  Docters  van Leeuwen,  both,  as  it  happened,  originally from  the  Netherlands.  “Ruben  is  really  a multi-talented dude, he is a young guy who writes songs himself, is also a virtuoso jazz bass player with a classical background and he  produces,”  Rios  recounts.  “I  knew  immediately that I wanted this guy to take over as a producer because he can make decisions very quickly and get things done very quickly, and also we were on the same page creatively. I didn’t have to explain anything.” With  Samama  on  bass,  his  wife  Docters van Leeuwen on cello and Rios on guitar, the trio rehearsed the songs in New York as he  was  writing  them.  Soon  Rios  realised this combination was the perfect ingredient for  his  new  album.  “They  both  have  this aesthetic  of  not  putting  things  in  there  if they don’t mean something,” Rios explains. “The album is very sparse and very minimal. In the beginning we tried out piano, drums, guitar and we got rid of everything. One day