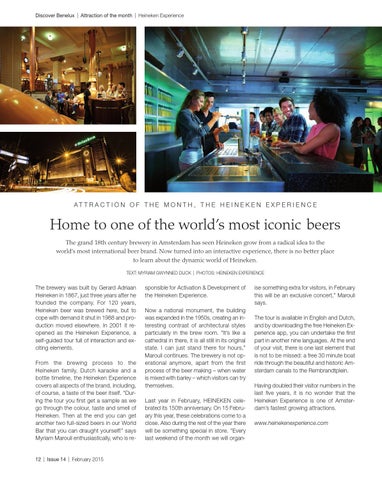 Home to one of the world’s most iconic beers The grand 18th century brewery in Amsterdam has seen Heineken grow from a radical idea to the world’s most international beer brand. Now turned into an interactive experience, there is no better place to learn about the dynamic world of Heineken. TEXT: MYRIAM GWYNNED DIJCK  |  PHOTOS: HEINEKEN EXPERIENCE

The brewery was built by Gerard Adriaan Heineken in 1867, just three years after he founded  the  company.  For  120  years, Heineken  beer  was  brewed  here,  but  to cope with demand it shut in 1988 and production  moved  elsewhere.  In  2001  it  reopened  as  the  Heineken  Experience,  a self-guided tour full of interaction and exciting elements. From  the  brewing  process  to  the Heineken  family,  Dutch  karaoke  and  a bottle timeline, the Heineken Experience covers all aspects of the brand, including, of course, a taste of the beer itself. “During the tour you first get a sample as we go through the colour, taste and smell of Heineken.  Then  at  the  end  you  can  get another two full-sized beers in our World Bar that you can draught yourself!” says Myriam Marouli enthusiastically, who is re-

sponsible for Activation & Development of the Heineken Experience. Now  a  national  monument,  the  building was expanded in the 1950s, creating an interesting  contrast  of  architectural  styles particularly  in  the  brew  room.  “It’s  like  a cathedral in there, it is all still in its original state.  I  can  just  stand  there  for  hours,” Marouli continues. The brewery is not operational  anymore,  apart  from  the  first process of the beer making – when water is mixed with barley – which visitors can try themselves. Last  year  in  February,  HEINEKEN  celebrated its 150th anniversary. On 15 February this year, these celebrations come to a close. Also during the rest of the year there will be something special in store. “Every last weekend of the month we will organ-

ise something extra for visitors, in February this will be an exclusive concert,” Marouli says. The tour is available in English and Dutch, and by downloading the free Heineken Experience app, you can undertake the first part in another nine languages. At the end of your visit, there is one last element that is not to be missed: a free 30 minute boat ride through the beautiful and historic Amsterdam canals to the Rembrandtplein.  Having doubled their visitor numbers in the last  five  years,  it  is  no  wonder  that  the Heineken  Experience  is  one  of  Amsterdam’s fastest growing attractions. www.heinekenexperience.com