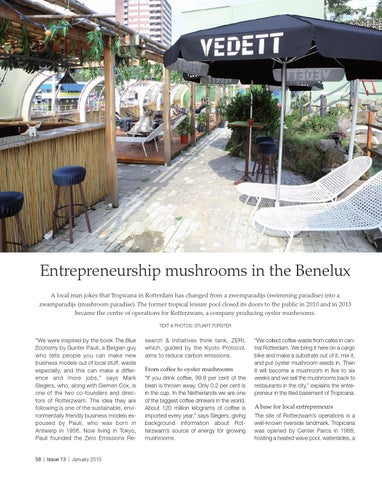 Entrepreneurship mushrooms in the Benelux A local man jokes that Tropicana in Rotterdam has changed from a zwemparadijs (swimming paradise) into a zwamparadijs (mushroom paradise). The former tropical leisure pool closed its doors to the public in 2010 and in 2013 became the centre of operations for Rotterzwam, a company producing oyster mushrooms. TEXT & PHOTOS: STUART FORSTER

“We were inspired by the book The Blue Economy by Gunter Pauli, a Belgian guy who  tells  people  you  can  make  new business models out of local stuff, waste especially,  and  this  can  make  a  difference  and  more  jobs,”  says  Mark Slegers, who, along with Siemen Cox, is one  of  the  two  co-founders  and  directors  of  Rotterzwam.  The  idea  they  are following is one of the sustainable, environmentally friendly business models espoused  by  Pauli,  who  was  born  in Antwerp  in  1956.  Now  living  in  Tokyo, Pauli  founded  the  zero  Emissions  Re-

From coffee to oyster mushrooms “If  you  drink  coffee,  99.8  per  cent  of  the bean is thrown away. Only 0.2 per cent is in the cup. In the Netherlands we are one of the biggest coffee drinkers in the world. About  120  million  kilograms  of  coffee  is imported every year,” says Slegers, giving background  information  about  Rotterzwam’s  source  of  energy  for  growing mushrooms.

“We collect coffee waste from cafes in central Rotterdam. We bring it here on a cargo bike and make a substrate out of it, mix it, and put oyster mushroom seeds in. Then it  will  become  a  mushroom  in  five  to  six weeks and we sell the mushrooms back to restaurants in the city,” explains the entrepreneur in the tiled basement of Tropicana.

A base for local entrepreneurs The  site  of  Rotterzwam’s  operations  is  a well-known riverside landmark. Tropicana was  opened  by  Center  Parcs  in  1988, hosting a heated wave pool, waterslides, a