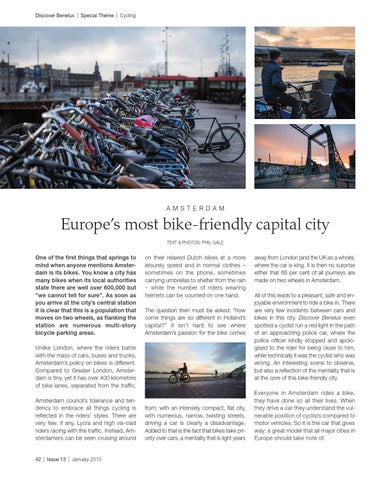 One of the first things that springs to mind when anyone mentions Amsterdam is its bikes. You know a city has many bikes when its local authorities state there are well over 600,000 but “we cannot tell for sure”. As soon as you arrive at the city’s central station it is clear that this is a population that moves on two wheels, as flanking the station are numerous multi-story bicycle parking areas.

on  their  relaxed  Dutch  bikes  at  a  more leisurely  speed  and  in  normal  clothes  – sometimes  on  the  phone,  sometimes  carrying umbrellas to shelter from the rain –  while  the  number  of  riders  wearing  helmets can be counted on one hand. The  question  then  must  be  asked:  “how come  things  are  so  different  in  Holland’s capital?”  It  isn’t  hard  to  see  where  Amsterdam’s passion for the bike comes

Unlike  London,  where  the  riders  battle with the mass of cars, buses and trucks, Amsterdam’s policy on bikes is different. Compared  to  Greater  London,  Amsterdam is tiny, yet it has over 400 kilometres of bike lanes, separated from the traffic.  Amsterdam  council’s  tolerance  and  tendency  to  embrace  all  things  cycling  is  reflected  in  the  riders’  styles.  There  are very  few,  if  any,  Lycra  and  high  vis-clad riders racing with the traffic. Instead, Amsterdamers can be seen cruising around

from; with an intensely compact, flat city, with  numerous,  narrow,  twisting  streets, driving  a  car  is  clearly  a  disadvantage. Added to that is the fact that bikes take priority over cars, a mentality that is light years

away from London (and the UK as a whole), where the car is king. It is then no surprise either that 68 per cent of all journeys are made on two wheels in Amsterdam. All of this leads to a pleasant, safe and enjoyable environment to ride a bike in. There are very few incidents between cars and bikes  in  this  city.  Discover Benelux even spotted a cyclist run a red light in the path of  an  approaching  police  car,  where  the police  officer  kindly  stopped  and  apologised to the rider for being close to him, while technically it was the cyclist who was wrong.  An  interesting  scene  to  observe, but also a reflection of the mentality that is at the core of this bike-friendly city. Everyone  in  Amsterdam  rides  a  bike, they have done so all their lives. When they drive a car they understand the vulnerable position of cyclists compared to motor vehicles. So it is the car that gives way: a great model that all major cities in Europe should take note of.