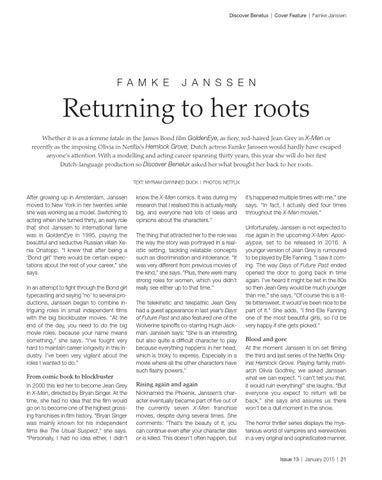 Returning to her roots Whether it is as a femme fatale in the James Bond film GoldenEye, as fiery, red-haired Jean Grey in X-Men or recently as the imposing Olivia in Netflix’s Hemlock Grove, Dutch actress Famke Janssen would hardly have escaped anyone’s attention. With a modelling and acting career spanning thirty years, this year she will do her first Dutch-language production so Discover Benelux asked her what brought her back to her roots. TEXT: MYRIAM GWYNNED DIJCK | PHOTOS: NETFLIX

After growing up in Amsterdam, Janssen moved to New York in her twenties while she was working as a model. Switching to acting when she turned thirty, an early role that shot Janssen to international fame was in GoldenEye in 1995, playing the beautiful and seductive Russian villain Xenia Onatopp. “I knew that after being a ‘Bond girl’ there would be certain expectations about the rest of your career,” she says. In an attempt to fight through the Bond girl typecasting and saying ‘no’ to several productions, Janssen began to combine intriguing roles in small independent films with the big blockbuster movies. “At the end of the day, you need to do the big movie roles, because your name means something,” she says. “I’ve fought very hard to maintain career longevity in this industry. I’ve been very vigilant about the roles I wanted to do.”

know the X-Men comics. It was during my research that I realised this is actually really big, and everyone had lots of ideas and opinions about the characters.” The thing that attracted her to the role was the way the story was portrayed in a realistic setting, tackling relatable concepts such as discrimination and intolerance. “It was very different from previous movies of the kind,” she says. “Plus, there were many strong roles for women, which you didn’t really see either up to that time.” The telekinetic and telepathic Jean Grey had a guest appearance in last year’s Days of Future Past and also featured one of the Wolverine spinoffs co-starring Hugh Jackman. Janssen says: “She is an interesting but also quite a difficult character to play because everything happens in her head, which is tricky to express. Especially in a movie where all the other characters have such flashy powers.”

From comic book to blockbuster In 2000 this led her to become Jean Grey in X-Men, directed by Bryan Singer. At the time, she had no idea that the film would go on to become one of the highest grossing franchises in film history. “Bryan Singer was mainly known for his independent films like The Usual Suspect,” she says. “Personally, I had no idea either, I didn’t

Rising again and again Nicknamed the Phoenix, Janssen’s character eventually became part of five out of the currently seven X-Men franchise movies, despite dying several times. She comments: “That’s the beauty of it, you can continue even after your character dies or is killed. This doesn’t often happen, but

it’s happened multiple times with me,” she says. “In fact, I actually died four times throughout the X-Men movies.” Unfortunately, Janssen is not expected to rise again in the upcoming X-Men: Apocalypse, set to be released in 2016. A younger version of Jean Grey is rumoured to be played by Elle Fanning. “I saw it coming. The way Days of Future Past ended opened the door to going back in time again. I’ve heard it might be set in the 80s so then Jean Grey would be much younger than me,” she says. “Of course this is a little bittersweet, it would’ve been nice to be part of it.” She adds, “I find Elle Fanning one of the most beautiful girls, so I’d be very happy if she gets picked.”

Blood and gore At the moment Janssen is on set filming the third and last series of the Netflix Original Hemlock Grove. Playing family matriarch Olivia Godfrey, we asked Janssen what we can expect. “I can’t tell you that, it would ruin everything!” she laughs. “But everyone you expect to return will be back,” she says and assures us there won’t be a dull moment in the show. The horror thriller series displays the mysterious world of vampires and werewolves in a very original and sophisticated manner,