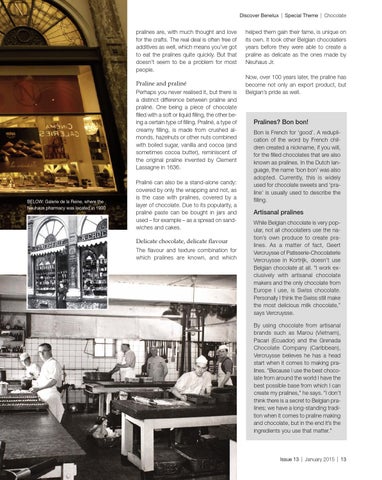 pralines are, with much thought and love for the crafts. The real deal is often free of additives as well, which means you’ve got to eat the pralines quite quickly. But that doesn’t  seem  to  be  a  problem  for  most people.

Praline and praliné Perhaps you never realised it, but there is a  distinct  difference  between  praline  and praliné.  One  being  a  piece  of  chocolate filled with a soft or liquid filling, the other being a certain type of filling. Praliné, a type of creamy  filling,  is  made  from  crushed  almonds, hazelnuts or other nuts combined with boiled sugar, vanilla and cocoa (and sometimes  cocoa  butter),  reminiscent  of the  original  praline  invented  by  Clement Lassagne in 1636.

BELOW: Galerie de la Reine, where the Neuhaus pharmacy was located in 1900

Praliné can also be a stand-alone candy: covered by only the wrapping and not, as is  the  case  with  pralines,  covered  by  a layer of chocolate. Due to its popularity, a praliné  paste  can  be  bought  in  jars  and used – for example – as a spread on sandwiches and cakes.

Delicate chocolate, delicate flavour The  flavour  and  texture  combination  for which  pralines  are  known,  and  which

helped them gain their fame, is unique on its own. It took other Belgian chocolatiers years  before  they  were  able  to  create  a praline  as  delicate  as  the  ones  made  by Neuhaus Jr.  Now, over 100 years later, the praline has become  not  only  an  export  product,  but Belgian’s pride as well.

Pralines? Bon bon! Bon is French for ‘good’. A reduplication  of  the  word  by  French  children created a nickname, if you will, for the filled chocolates that are also known as pralines. In the Dutch language, the name ‘bon bon’ was also adopted.  Currently,  this  is  widely used for chocolate sweets and ‘praline’ is usually used to describe the filling.

Artisanal pralines While Belgian chocolate is very popular, not all chocolatiers use the nation’s  own  produce  to  create  pralines.  As  a  matter  of  fact,  Geert Vercruysse of Patisserie-Chocolaterie Vercruysse  in  Kortrijk,  doesn’t  use Belgian chocolate at all. “I work exclusively  with  artisanal  chocolate makers and the only chocolate from Europe  I  use,  is  Swiss  chocolate. Personally I think the Swiss still make the  most  delicious  milk  chocolate,” says Vercruysse. By  using  chocolate  from  artisanal brands  such  as  Marou  (Vietnam), Pacari  (Ecuador)  and  the  Grenada Chocolate  Company  (Caribbean), Vercruysse  believes  he  has  a  head start when it comes to making pralines. “Because I use the best chocolate from around the world I have the best possible base from which I can create my pralines,” he says. “I don’t think there is a secret to Belgian pralines; we have a long-standing tradition when it comes to praline making and chocolate, but in the end it’s the ingredients you use that matter.”