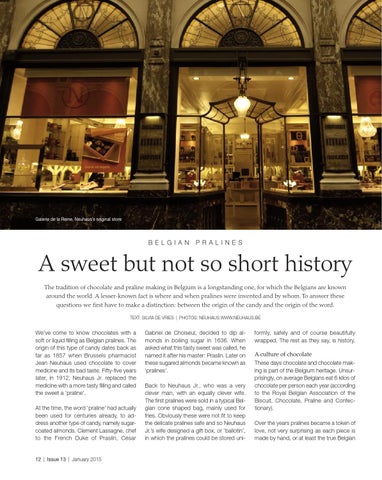 A sweet but not so short history The tradition of chocolate and praline making in Belgium is a longstanding one, for which the Belgians are known around the world. A lesser-known fact is where and when pralines were invented and by whom. To answer these questions we first have to make a distinction: between the origin of the candy and the origin of the word. TEXT: SILVIA DE VRIES  |  PHOTOS: NEUHAUS WWW.NEUHAUS.BE

We’ve  come  to  know  chocolates  with  a soft or liquid filling as Belgian pralines. The origin of this type of candy dates back as far  as  1857  when  Brussels  pharmacist Jean  Neuhaus  used  chocolate  to  cover medicine and its bad taste. Fifty-five years later,  in  1912,  Neuhaus  Jr.  replaced  the medicine with a more tasty filling and called the sweet a ‘praline’. At the time, the word ‘praline’ had actually been  used  for  centuries  already,  to  address another type of candy, namely sugarcoated almonds. Clement Lassagne, chef to  the  French  Duke  of  Praslin,  César

Gabriel  de  Choiseul,  decided  to  dip  almonds  in  boiling  sugar  in  1636.  When asked what this tasty sweet was called, he named it after his master: Praslin. Later on these sugared almonds became known as ‘pralines’. Back  to  Neuhaus  Jr.,  who  was  a  very clever  man,  with  an  equally  clever  wife. The first pralines were sold in a typical Belgian  cone  shaped  bag,  mainly  used  for fries. Obviously these were not fit to keep the delicate pralines safe and so Neuhaus Jr.’s wife designed a gift box, or ‘ballotin’, in which the pralines could be stored uni-

formly,  safely  and  of  course  beautifully wrapped. The rest as they say, is history.

A culture of chocolate These days chocolate and chocolate making is part of the Belgium heritage. Unsurprisingly, on average Belgians eat 6 kilos of chocolate per person each year (according to  the  Royal  Belgian  Association  of  the Biscuit,  Chocolate,  Praline  and  Confectionary).  Over the years pralines became a token of love, not very surprising as each piece is made by hand, or at least the true Belgian