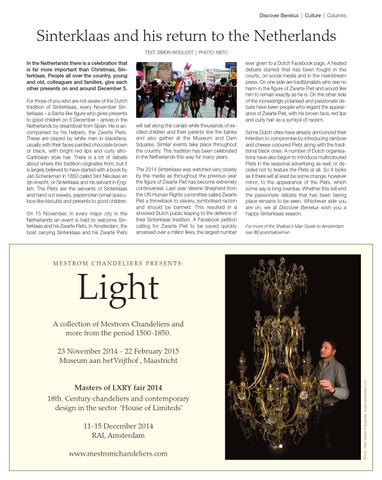 Sinterklaas and his return to the Netherlands TEXT: SIMON WOOLCOT  |  PHOTO: NBTC

ever given to a Dutch Facebook page. A heated debate started that has been fought in the courts, on social media and in the mainstream press. On one side are traditionalists who see no harm in the figure of Zwarte Piet and would like him to remain exactly as he is. On the other side of the increasingly polarised and passionate debate have been people who regard the appearance of Zwarte Piet, with his brown face, red lips and curly hair as a symbol of racism.

In the Netherlands there is a celebration that is far more important than Christmas, Sinterklaas. People all over the country, young and old, colleagues and families, give each other presents on and around December 5. For those of you who are not aware of the Dutch tradition of Sinterklaas, every November Sinterklaas – a Santa-like figure who gives presents to good children on 5 December – arrives in the Netherlands by steamboat from Spain. He is accompanied by his helpers, the Zwarte Piets. These are played by white men in blackface, usually with their faces painted chocolate brown or black, with bright red lips and curly afroCaribbean style hair. There is a lot of debate about where this tradition originates from, but it is largely believed to have started with a book by Jan Schenkman in 1850 called Sint Nikolaas en zijn knecht, or Sinterklaas and his servant in English. The Piets are the servants of Sinterklaas and hand out sweets, pepernoten (small speculoos-like biscuits) and presents to good children. On 15 November, in every major city in the Netherlands an event is held to welcome Sinterklaas and his Zwarte Piets. In Amsterdam, the boat carrying Sinterklaas and his Zwarte Piets

will sail along the canals while thousands of excited children and their parents line the banks and also gather at the Museum and Dam Squares. Similar events take place throughout the country. This tradition has been celebrated in the Netherlands this way for many years. The 2014 Sinterklaas was watched very closely by the media as throughout the previous year the figure of Zwarte Piet has become extremely controversial. Last year Verene Shepherd from the UN Human Rights committee called Zwarte Piet a throwback to slavery, symbolised racism and should be banned. This resulted in a shocked Dutch public leaping to the defence of their Sinterklaas tradition. A Facebook petition calling for Zwarte Piet to be saved quickly amassed over a million likes, the largest number

Some Dutch cities have already announced their intention to compromise by introducing rainbow and cheese coloured Piets along with the traditional black ones. A number of Dutch organisations have also begun to introduce multicoloured Piets in the seasonal advertising as well, or decided not to feature the Piets at all. So it looks as if there will at least be some change, however minor, to the appearance of the Piets, which some say is long overdue. Whether this will end the passionate debate that has been taking place remains to be seen. Whichever side you are on, we at Discover Benelux wish you a happy Sinterklaas season. For more of the Shallow’s Man Guide to Amsterdam see @Expatshallowman

Light A collection of Mestrom Chandeliers and more from the period 1500-1850.