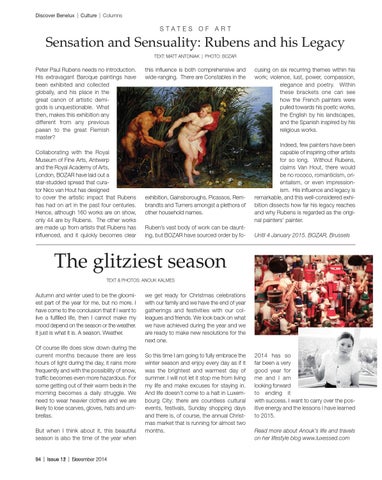 Peter Paul Rubens needs no introduction. His extravagant Baroque paintings have been exhibited and collected globally, and his place in the great canon of artistic demigods is unquestionable. What then, makes this exhibition any different from any previous paean to the great Flemish master? Collaborating with the Royal Museum of Fine Arts, Antwerp and the Royal Academy of Arts, London, BOZAR have laid out a star-studded spread that curator Nico van Hout has designed to cover the artistic impact that Rubens has had on art in the past four centuries. Hence, although 160 works are on show, only 44 are by Rubens. The other works are made up from artists that Rubens has influenced, and it quickly becomes clear

this influence is both comprehensive and wide-ranging. There are Constables in the

exhibition, Gainsboroughs, Picassos, Rembrandts and Turners amongst a plethora of other household names. Ruben’s vast body of work can be daunting, but BOZAR have sourced order by fo-

cusing on six recurring themes within his work; violence, lust, power, compassion, elegance and poetry. Within these brackets one can see how the French painters were pulled towards his poetic works, the English by his landscapes, and the Spanish inspired by his religious works. Indeed, few painters have been capable of inspiring other artists for so long. Without Rubens, claims Van Hout, there would be no rococo, romanticism, orientalism, or even impressionism. His influence and legacy is remarkable, and this well-considered exhibition dissects how far his legacy reaches and why Rubens is regarded as the original painters’ painter. Until 4 January 2015. BOZAR, Brussels

Autumn and winter used to be the gloomiest part of the year for me, but no more. I have come to the conclusion that if I want to live a fulfilled life, then I cannot make my mood depend on the season or the weather. It just is what it is. A season. Weather. Of course life does slow down during the current months because there are less hours of light during the day, it rains more frequently and with the possibility of snow, traffic becomes even more hazardous. For some getting out of their warm beds in the morning becomes a daily struggle. We need to wear heavier clothes and we are likely to lose scarves, gloves, hats and umbrellas. But when I think about it, this beautiful season is also the time of the year when

we get ready for Christmas celebrations with our family and we have the end of year gatherings and festivities with our colleagues and friends. We look back on what we have achieved during the year and we are ready to make new resolutions for the next one. So this time I am going to fully embrace the winter season and enjoy every day as if it was the brightest and warmest day of summer. I will not let it stop me from living my life and make excuses for staying in. And life doesn’t come to a halt in Luxembourg City: there are countless cultural events, festivals, Sunday shopping days and there is, of course, the annual Christmas market that is running for almost two months.

2014 has so far been a very good year for me and I am looking forward to ending it with success. I want to carry over the positive energy and the lessons I have learned to 2015. Read more about Anouk’s life and travels on her lifestyle blog www.luxessed.com