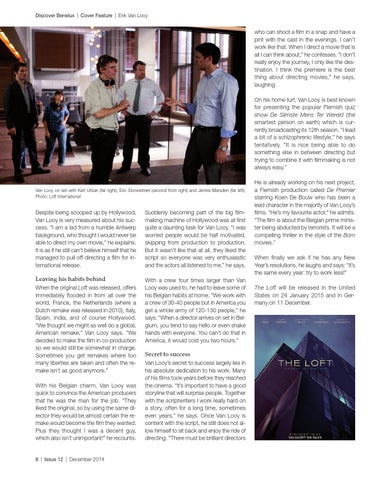 who can shoot a film in a snap and have a pint with the cast in the evenings. I can’t work like that. When I direct a movie that is all I can think about,” he confesses. “I don’t really enjoy the journey, I only like the destination. I think the premiere is the best thing about directing movies,” he says, laughing. On his home turf, Van Looy is best known for presenting the popular Flemish quiz show De Slimste Mens Ter Wereld (the smartest person on earth) which is currently broadcasting its 12th season. “I lead a bit of a schizophrenic lifestyle,” he says tentatively. “It is nice being able to do something else in between directing but trying to combine it with filmmaking is not always easy.”

Despite being scooped up by Hollywood, Van Looy is very measured about his success. “I am a lad from a humble Antwerp background, who thought I would never be able to direct my own movie,” he explains. It is as if he still can’t believe himself that he managed to pull off directing a film for international release.

Suddenly becoming part of the big filmmaking machine of Hollywood was at first quite a daunting task for Van Looy. “I was worried people would be half motivated, skipping from production to production. But it wasn’t like that at all, they liked the script so everyone was very enthusiastic and the actors all listened to me,” he says.

Leaving his habits behind

With a crew four times larger than Van Looy was used to, he had to leave some of his Belgian habits at home. “We work with a crew of 30-40 people but in America you get a whole army of 120-130 people,” he says. “When a director arrives on set in Belgium, you tend to say hello or even shake hands with everyone. You can’t do that in America, it would cost you two hours.”

When the original Loft was released, offers immediately flooded in from all over the world, France, the Netherlands (where a Dutch remake was released in 2010), Italy, Spain, India, and of course Hollywood. “We thought we might as well do a global, American remake,” Van Looy says. “We decided to make the film in co-production so we would still be somewhat in charge. Sometimes you get remakes where too many liberties are taken and often the remake isn’t as good anymore.” With his Belgian charm, Van Looy was quick to convince the American producers that he was the man for the job. “They liked the original, so by using the same director they would be almost certain the remake would become the film they wanted. Plus they thought I was a decent guy, which also isn’t unimportant!” he recounts.

Secret to success Van Looy’s secret to success largely lies in his absolute dedication to his work. Many of his films took years before they reached the cinema. “It’s important to have a good storyline that will surprise people. Together with the scriptwriters I work really hard on a story, often for a long time, sometimes even years,” he says. Once Van Looy is content with the script, he still does not allow himself to sit back and enjoy the ride of directing. “There must be brilliant directors

He is already working on his next project, a Flemish production called De Premier starring Koen De Bouw who has been a lead character in the majority of Van Looy’s films. “He’s my favourite actor,” he admits. “The film is about the Belgian prime minister being abducted by terrorists. It will be a compelling thriller in the style of the Born movies.” When finally we ask if he has any New Year’s resolutions, he laughs and says: “It’s the same every year: try to work less!” The Loft will be released in the United States on 24 January 2015 and in Germany on 11 December.