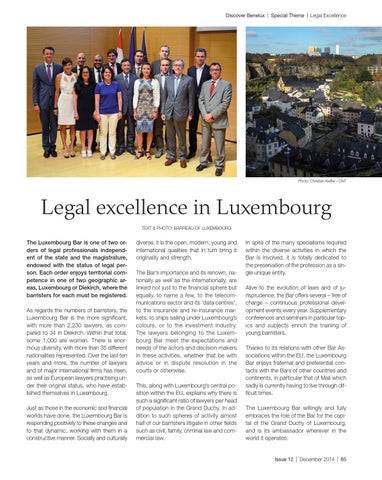 The Luxembourg Bar is one of two orders of legal professionals independent of the state and the magistrature, endowed with the status of legal person. Each order enjoys territorial competence in one of two geographic areas, Luxembourg or Diekirch, where the barristers for each must be registered. As regards the numbers of barristers, the Luxembourg Bar is the more significant, with more than 2,230 lawyers, as compared to 34 in Diekirch. Within that total, some 1,000 are women. There is enormous diversity, with more than 35 different nationalities represented. Over the last ten years and more, the number of lawyers and of major international firms has risen, as well as European lawyers practising under their original status, who have established themselves in Luxembourg. Just as those in the economic and financial worlds have done, the Luxembourg Bar is responding positively to these changes and to that dynamic, working with them in a constructive manner. Socially and culturally

diverse, it is the open, modern, young and international qualities that in turn bring it originality and strength. The Bar’s importance and its renown, nationally as well as the internationally, are linked not just to the financial sphere but equally, to name a few, to the telecommunications sector and its ‘data centres’, to the insurance and re-insurance markets, to ships sailing under Luxembourg’s colours, or to the investment industry. The lawyers belonging to the Luxembourg Bar meet the expectations and needs of the actors and decision makers in these activities, whether that be with advice or in dispute resolution in the courts or otherwise. This, along with Luxembourg’s central position within the EU, explains why there is such a significant ratio of lawyers per head of population in the Grand Duchy. In addition to such spheres of activity almost half of our barristers litigate in other fields such as civil, family, criminal law and commercial law.

In spite of the many specialisms required within the diverse activities in which the Bar is involved, it is totally dedicated to the preservation of the profession as a single unique entity. Alive to the evolution of laws and of jurisprudence, the Bar offers several – free of charge – continuous professional development events every year. Supplementary conferences and seminars in particular topics and subjects enrich the training of young barristers. Thanks to its relations with other Bar Associations within the EU, the Luxembourg Bar enjoys fraternal and preferential contacts with the Bars of other countries and continents, in particular that of Mali which sadly is currently having to live through difficult times. The Luxembourg Bar willingly and fully embraces the role of the Bar for the capital of the Grand Duchy of Luxembourg, and is its ambassador wherever in the world it operates.