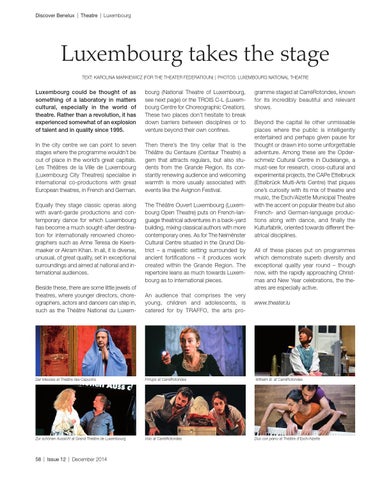 Luxembourg could be thought of as something of a laboratory in matters cultural, especially in the world of theatre. Rather than a revolution, it has experienced somewhat of an explosion of talent and in quality since 1995.

bourg  (National  Theatre  of  Luxembourg, see next page) or the TROIS C-L (Luxembourg Centre for Choreographic Creation). These two places don’t hesitate to break down  barriers  between  disciplines  or  to venture beyond their own confines.

In  the  city  centre  we  can  point  to  seven stages where the programme wouldn’t be out of place in the world’s great capitals. Les  Théâtres  de  la  Ville  de  Luxembourg (Luxembourg  City  Theatres)  specialise  in international  co-productions  with  great  European theatres, in French and German.

Then  there’s  the  tiny  cellar  that  is  the Théâtre  du  Centaure  (Centaur  Theatre)  a gem  that  attracts  regulars,  but  also  students  from  the  Grande  Region.  Its  constantly renewing audience and welcoming warmth  is  more  usually  associated  with events like the Avignon Festival.

Equally  they  stage  classic  operas  along with  avant-garde  productions  and  contemporary  dance  for  which  Luxembourg has become a much sought-after destination  for  internationally  renowned   choreo graphers such as Anne Teresa de Keersmaeker or Akram Khan. In all, it is diverse, unusual, of great quality, set in exceptional surroundings and aimed at national and international audiences.

The Théâtre Ouvert Luxembourg (Luxembourg Open Theatre) puts on French-language theatrical adventures in a back-yard building, mixing classical authors with more contemporary ones. As for The Neimënster Cultural Centre situated in the Grund District  –  a  majestic  setting  surrounded  by ancient  fortifications  –  it  produces  work created  within  the  Grande  Region.  The repertoire leans as much towards Luxembourg as to international pieces.

gramme staged at CarréRotondes, known for  its  incredibly  beautiful  and  relevant shows.  Beyond  the  capital  lie  other  unmissable places  where  the  public  is  intelligently  entertained and perhaps given pause for thought or drawn into some unforgettable adventure.  Among  these  are  the  Opderschmelz  Cultural  Centre  in  Dudelange,  a must-see for research, cross-cultural and experimental projects, the CAPe Ettelbruck (Ettelbrück  Multi-Arts  Centre)  that  piques one’s curiosity with its mix of theatre and music, the Esch/Alzette Municipal Theatre with the accent on popular theatre but also French-  and  German-language  productions  along  with  dance,  and  finally  the  Kultur  fabrik, oriented towards different theatrical disciplines.  All  of  these  places  put  on  programmes which  demonstrate  superb  diversity  and exceptional  quality  year  round  –  though now, with the rapidly approaching Christmas and New Year celebrations, the theatres are especially active.

Beside these, there are some little jewels of theatres, where younger directors, choreographers, actors and dancers can step in, such  as  the  Théâtre  National  du  Luxem-

An  audience  that  comprises  the  very young,  children  and  adolescents,  is catered  for  by  TRAFFO,  the  arts  pro-