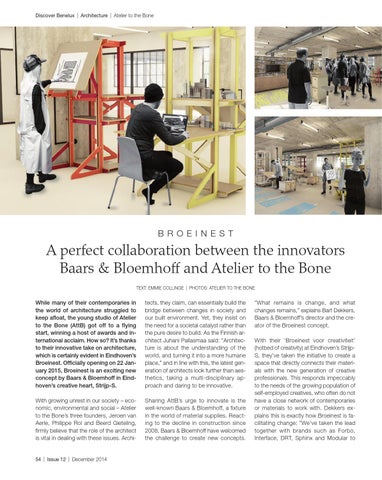 A perfect collaboration between the innovators Baars & Bloemhoff and Atelier to the Bone TEXT: EMMIE COLLINGE  |  PHOTOS:  ATELIER TO THE BONE

While many of their contemporaries in the world of architecture struggled to keep afloat, the young studio of Atelier to the Bone (AttB) got off to a flying start, winning a host of awards and international acclaim. How so? It’s thanks to their innovative take on architecture, which is certainly evident in Eindhoven’s Broeinest. Officially opening on 22 January 2015, Broeinest is an exciting new concept by Baars & Bloemhoff in Eindhoven’s creative heart, Strijp-S.

tects, they claim, can essentially build the bridge  between  changes  in  society  and our built environment. Yet, they insist on the need for a societal catalyst rather than the pure desire to build. As the Finnish architect Juhani Pallasmaa said: “Architecture  is  about  the  understanding  of  the world, and turning it into a more humane place,” and in line with this, the latest generation of architects look further than aesthetics,  taking  a  multi-disciplinary  approach and daring to be innovative.

With growing unrest in our society – economic, environmental and social – Atelier to the Bone’s three founders, Jeroen van Aerle,  Philippe  Rol  and  Beerd  Gieteling, firmly believe that the role of the architect is vital in dealing with these issues. Archi-

Sharing  AttB’s  urge  to  innovate  is  the well-known Baars & Bloemhoff, a fixture in the world of material supplies. Reacting to the decline in construction since 2008, Baars & Bloemhoff have welcomed the  challenge  to  create  new  concepts.

“What  remains  is  change,  and  what changes remains,” explains Bart Dekkers, Baars & Bloemhoff’s director and the creator of the Broeinest concept.  With  their  ‘Broeinest  voor  creativiteit’ (hotbed of creativity) at Eindhoven’s StrijpS, they’ve taken the initiative to create a space that directly connects their materials  with  the  new  generation  of  creative professionals. This responds impeccably to the needs of the growing population of self-employed creatives, who often do not have a close network of contemporaries or  materials  to  work  with.  Dekkers  explains this is exactly how Broeinest is facilitating change: “We’ve taken the lead together  with  brands  such  as  Forbo,  Interface,  DRT,  Sphinx  and   Modular  to