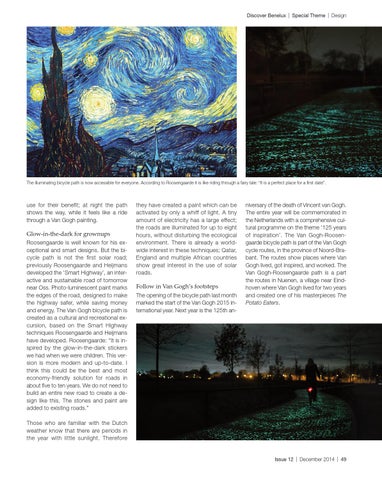 The illuminating bicycle path is now accessible for everyone. According to Roosengaarde it is like riding through a fairy tale: “It is a perfect place for a first date”.

Glow-in-the-dark for grownups Roosengaarde is well known for his exceptional and smart designs. But the bicycle  path  is  not  the  first  solar  road; previously Roosengaarde and Heijmans developed the ‘Smart Highway’, an interactive and sustainable road of tomorrow near Oss. Photo-luminescent paint marks the edges of the road, designed to make the  highway  safer,  while  saving  money and energy. The Van Gogh bicycle path is created as a cultural and recreational excursion,  based  on  the  Smart  Highway techniques Roosengaarde and Heijmans have developed. Roosengaarde: “It is inspired  by  the  glow-in-the-dark  stickers we had when we were children. This version  is  more  modern  and  up-to-date.  I think  this  could  be  the  best  and  most economy-friendly  solution  for  roads  in about five to ten years. We do not need to build an entire new road to create a design  like  this.  The  stones  and  paint  are added to existing roads.”

they have created a paint which can be activated by only a whiff of light. A tiny amount of electricity has a large effect; the roads are illuminated for up to eight hours, without disturbing the ecological environment.  There  is  already  a  worldwide interest in these techniques; Qatar, England  and  multiple  African  countries show  great  interest  in  the  use  of  solar roads.

Follow in Van Gogh’s footsteps The opening of the bicycle path last month marked the start of the Van Gogh 2015 international year. Next year is the 125th an-

niversary of the death of Vincent van Gogh.  The entire year will be commemorated in the Netherlands with a comprehensive cultural programme on the theme ‘125 years of  inspiration’.  The  Van  Gogh-Roosengaarde bicycle path is part of the Van Gogh cycle routes, in the province of Noord-Brabant. The routes show places where Van Gogh lived, got inspired, and worked. The Van  Gogh-Roosengaarde  path  is  a  part the routes in Nuenen, a village near Eindhoven where Van Gogh lived for two years and created one of his masterpieces The Potato Eaters.

Those  who  are  familiar  with  the  Dutch weather know that there are periods in the  year  with  little  sunlight.  Therefore