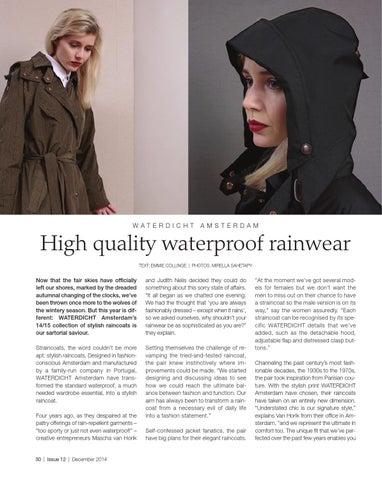 Now that the fair skies have officially left our shores, marked by the dreaded autumnal changing of the clocks, we’ve been thrown once more to the wolves of the wintery season. But this year is different: WATERDICHT Amsterdam’s 14/15 collection of stylish raincoats is our sartorial saviour.

and  Judith  Nelis  decided  they  could  do something about this sorry state of affairs. “It all began as we chatted one evening. We had the thought that ‘you are always fashionably dressed – except when it rains’, so we asked ourselves, why shouldn’t your rainwear be as sophisticated as you are?” they explain.

Straincoats,  the  word  couldn’t  be  more apt: stylish raincoats. Designed in fashionconscious Amsterdam and manufactured by  a  family-run  company  in  Portugal,  WATERDICHT  Amsterdam  have  transformed the standard waterproof, a much needed wardrobe essential, into a stylish raincoat.

Setting themselves the challenge of revamping  the  tried-and-tested  raincoat, the  pair  knew  instinctively  where  improvements could be made. “We started designing  and  discussing  ideas  to  see how  we  could  reach  the  ultimate  balance between fashion and function. Our aim has always been to transform a raincoat  from  a  necessary  evil  of  daily  life into a fashion statement.”

Four years ago, as they despaired at the paltry offerings of rain-repellent garments – “too sporty or just not even waterproof!” – creative entrepreneurs Mascha van Horik

Self-confessed  jacket  fanatics,  the  pair have big plans for their elegant raincoats.

“At the moment we’ve got several models  for  females  but  we  don’t  want  the men to miss out on their chance to have a straincoat so the male version is on its way,”  say  the  women  assuredly.  “Each straincoat can be recognised by its specific  WATERDICHT  details  that  we’ve added,  such  as  the  detachable  hood, adjustable flap and distressed clasp buttons.” Channeling the past century’s most fashionable decades, the 1930s to the 1970s, the pair took inspiration from Parisian couture.  With  the  stylish  print  WATERDICHT Amsterdam  have  chosen,  their  raincoats have taken on an entirely new dimension. “Understated  chic  is  our  signature  style,” explains Van Horik from their office in Amsterdam, “and we represent the ultimate in comfort too. The unique fit that we’ve perfected over the past few years enables you