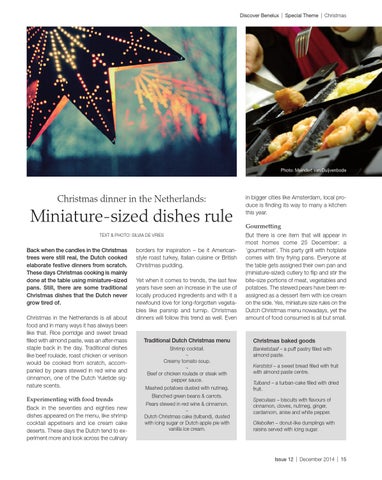 Christmas dinner in the Netherlands:

Back when the candles in the Christmas trees were still real, the Dutch cooked elaborate festive dinners from scratch. These days Christmas cooking is mainly done at the table using miniature-sized pans. Still, there are some traditional Christmas dishes that the Dutch never grow tired of. Christmas in the Netherlands is all about food and in many ways it has always been like that. Rice porridge and sweet bread filled with almond paste, was an after-mass staple back in the day. Traditional dishes like beef roulade, roast chicken or venison would be cooked from scratch, accompanied by pears stewed in red wine and cinnamon, one of the Dutch Yuletide signature scents.

Experimenting with food trends Back in the seventies and eighties new dishes appeared on the menu, like shrimp cocktail appetisers and ice cream cake deserts. These days the Dutch tend to experiment more and look across the culinary

borders for inspiration – be it Americanstyle roast turkey, Italian cuisine or British Christmas pudding. Yet when it comes to trends, the last few years have seen an increase in the use of locally produced ingredients and with it a newfound love for long-forgotten vegetables like parsnip and turnip. Christmas dinners will follow this trend as well. Even

in bigger cities like Amsterdam, local produce is finding its way to many a kitchen this year.

Gourmetting But there is one item that will appear in most homes come 25 December: a ‘gourmetset’. This party grill with hotplate comes with tiny frying pans. Everyone at the table gets assigned their own pan and (miniature-sized) cutlery to flip and stir the bite-size portions of meat, vegetables and potatoes. The stewed pears have been reassigned as a dessert item with ice cream on the side. Yes, miniature size rules on the Dutch Christmas menu nowadays, yet the amount of food consumed is all but small.