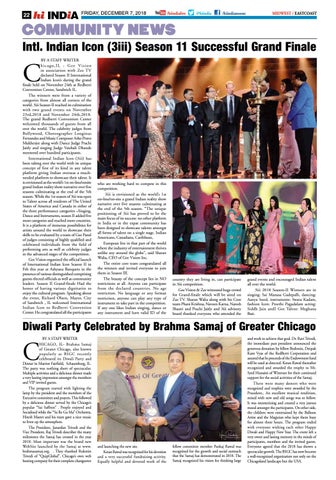 Intl. Indian Icon (3iii) Season 11 Successful Grand Finale BY A STAFF WRITER hicago,IL : Gee Vision in association with Zee TV declared Season II International Indian Icon’s during the grand finale held on November 24th at Redberri Convention Center, Sandwich IL. The winners were from a variety of categories from almost all corners of the world. 3iii Season-II reached its culmination with two grand events on November 23rd,2018 and November 24th,2018. The grand Redberri Convention Center welcomed thousands of guests from all over the world. The celebrity judges from Bollywood, Choreographer Longinus Fernandes and Music Composer Arko Pravo Mukherjee along with Dance Judge Prachi Jaitly and singing Judge Vaishali Dhande mentored over hundred participants. International Indian Icon (3iii) has been taking over the world with its unique concept of first of its kind in any talent platform giving Indian overseas a muchneeded platform to showcase their talent. It is envisioned as the world’s 1st on-line/onsite grand Indian reality show narrative over five seasons culminating at the end of the 5th season. While the 1st season of 3iii was open to Talent across all residents of The United States of America and Canada in either of the three performance categories –Singing, Dance and Instruments, season II added five more categories and reached more countries. It is a platform of immense possibilities for artists around the world to showcase their skills to be evaluated by a team of Gee Panel of judges consisting of highly qualified and celebrated individuals from the field of performing arts as well as celebrity judges in the advanced stages of the competition. Gee Vision organized the official launch of International Indian Icon Season II in Feb this year at Ashyana Banquets in the presence of various distinguished comprising guests elected officials as well as community leaders. Season II Grand-finale Had the honor of having various dignitaries to enjoy the cultural program. Speaking about the event, Richard Olson, Mayor, City of Sandwich , IL welcomed International Indian Icon to Redberri Convention Center. He congratulated all the participants

who are working hard to compete in this competition. 3iii is envisioned as the world’s 1st on-line/on-site a grand Indian reality show narrative over five seasons culminating at the end of the 5th season. “The unique positioning of 3iii has proved to be the main focus of its success: no other platform in India or in the expat community has been designed to showcase talents amongst all forms of talent on a single stage. Indian Americans, Canadians, Caribbean, European live in that part of the world where the industry of entertainment thrives unlike any around the globe”, said Sharan Walia, CEO of Gee Vision Inc. The entire core team congratulated all the winners and invited everyone to join them in Season III. The beauty of the concept lies in NO restrictions at all. Anyone can participate from the declared countries. No age restriction. No language or any format restriction, anyone can play any type of instrument to take part in the competition. If any one likes Indian singing, dance or any instrument and have valid ID of the

country they are living in, can participate in 3iii competition. Gee Vision & Zee witnessed huge crowd for Grand-finale which will be aired on Zee TV. Sharan Walia along with his Core team Phani Krishna, Naveen Karna, Naresh Shastri and Prachi Jaitly and 3iii advisory board thanked everyone who attended the

Diwali Party Celebrated by Brahma Samaj of Greater Chicago BY A STAFF WRITER HICAGO, IL- Brahma Samaj of Greater Chicago, also known popularly as BSGC recently celebrated its Diwali Party and Dinner in Marriot Fairfield, Schaumburg, IL. The party was nothing short of spectacular. Multiple activities and a delicious dinner made a very lasting impression amongst the members and VIP invited guests. The program started with lighting the lamp by the president and the members of the Executive committee and prayers. This followed by a delicious dinner served by the Chicago’s popular “Sai Saffron” . People enjoyed and Socialized while the “Sa Re Ga Ma” Orchestra, Hitesh Master and his team gave a nice music to liven up the atmosphere. The President, Janardan Trivedi and the Vice President, Raj Trivedi describer the many milestones the Samaj has crossed in the year 2018. Most important was the brand new WebSite launched by the Samaj at www. brahmasamaj.org. . They thanked Rukmin Trivedi of “QuipGlobal”, Chicago’s own web hosting company for their complete changeover

and launching the new site. Ketan Rawal was recognized for his devotion and a very successful fundraising activity. Equally helpful and devoted work of the

fellow committee member Pankaj Rawal was recognized for the growth and social outreach that the Samaj has demonstrated in 2018. The Samaj recognized his vision for thinking large

and work to achieve that goal. Dr. Ravi Trivedi, the immediate past president announced the generous donation by fellow Brahmin, Deepak Kant Vyas of the RedBerri Corporation and assured that ht proceeds of the Endowment fund will be used as directed. Ketan Rawal thereafter recognized and awarded the trophy to Mr. Syed Hussaini of Wintrust for their continued support for the social activities of the Samaj. There were many donors who were recognized and trophies were awarded by the Prasident,. An excellent musical rendition, mixed with new and old songs was to follow. It was mesmerizing and created a very joyous mood amongst the participants. On other side, the children were entertained by the Balloon Artist and the Magician who kept them busy for almost three hours. The program ended with everyone wishing each other Happy Diwali and Happy New Year. The event left a very sweet and lasting memory in the minds of participants, members and the invited guests. Everyone agreed that the 2018 has shown a spectacular growth. The BSGC has now become a well-recognized organization not only on the Chicagoland landscape but the USA. 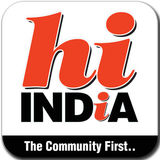