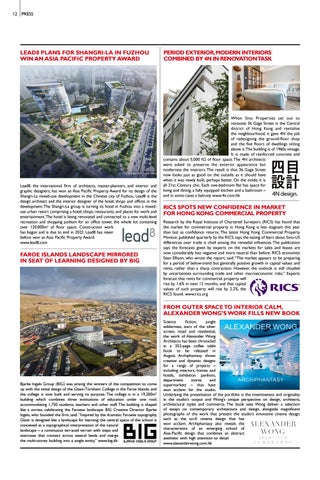 Lead8, the international firm of architects, master-planners, and interior and graphic designers, has won an Asia Pacific Property Award for its design of the Shangri-La mixed-use development in the Chinese city of Fuzhou. Lead8 is the design architect and the interior designer of the hotel, shops and offices in the development. The Shangri-La group is turning its hotel in Fuzhou into a mixeduse urban resort comprising a hotel, shops, restaurants, and places for work and entertainment. The hotel is being renovated and connected to a new multi-level recreation and shopping podium for an office tower, the whole lot containing over 120,000m2 of floor space. Construction work has begun and is due to end in 2022. Lead8 has never before won an Asia Pacific Property Award. www.lead8.com

When Sino Properties set out to renovate 36 Gage Street in the Central district of Hong Kong and revitalise the neighbourhood, it gave 4N the job of redesigning the ground-floor shop and the five floors of dwellings sitting above it. The building is of 1960s vintage. It is made of reinforced concrete and contains about 5,000 ft2 of floor space. The 4N architects were asked to preserve the exterior appearance but modernise the interiors. The result is that 36 Gage Street now looks just as good on the outside as it should have when it was newly built, perhaps better. On the inside, it is all 21st Century chic. Each one-bedroom flat has space for living and dining, a fully equipped kitchen and a bathroom – and in some cases a balcony. www.4n.com.hk

RICS SPOTS NEW CONFIDENCE IN MARKET FOR HONG KONG COMMERCIAL PROPERTY Research by the Royal Institute of Chartered Surveyors (RICS) has found that the market for commercial property in Hong Kong is less stagnant this year than last as confidence returns. The latest Hong Kong Commercial Property Monitor, published quarterly by the RICS, says the easing of fears about Sino-US differences over trade is chief among the remedial influences. The publication says the forecasts given by experts on the markets for sales and leases are now considerably less negative and more neutral than before. RICS economist Sean Ellison, who wrote the report, said: “The market appears to be preparing for a period of below-trend but generally positive growth in capital values and rents, rather than a sharp contraction. However, the outlook is still clouded by uncertainties surrounding trade and other macroeconomic risks.” Experts forecast that rents for commercial property will rise by 1.6% in next 12 months, and that capital values of such property will rise by 2.2%, the RICS found. www.rics.org

Bjarke Ingels Group (BIG) was among the winners of the competition to come up with the initial design of the Glasir-Tórshavn College in the Faroe Islands, and the college is now built and serving its purpose. The college is in a 19,200m2 building which combines three institutions of education under one roof, accommodating 1,750 students, teachers and other staff. The building is shaped like a vortex, celebrating the Faroese landscape. BIG Creative Director Bjarke Ingels, who founded the firm, said: ”Inspired by the dramatic Faroese topography, Glasir is designed like a landscape for learning: the central space of the school is conceived as a topographical interpretation of the natural landscape – a continuous terraced terrain with steps and staircases that connect across several levels and merge the multi-storey building into a single entity.” www.big.dk

Science fiction, jungle wilderness, stars of the silver screen, retail and residential, the work of Alexander Wong Architects has been chronicled in a 352-page coffee table book to be released in August. Archiphantasy shows creative and dynamic designs for a range of projects – including interiors, homes and hotels, exhibition pavilions, department stores and supermarkets – that have won acclaim for the studio. Underlying the presentation of the portfolio is the inventiveness and originality in the studio’s output and Wong’s unique perspective on design, architects, architectural styles and commerce. The book sees Wong deliver a selection of essays on contemporary architecture and design, alongside magnificent photographs of the work that present the studio’s innovative cinema design, such as the sci-fi cinema design that has won acclaim. Archiphantasy also reveals the characteristics of an emerging school of Asia-Pacific design that combines an abstract aesthetic with high attention to detail. www.alexanderwong.com.hk 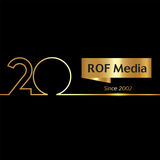