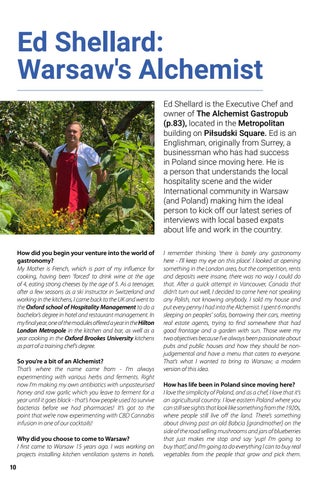 Ed Shellard: Warsaw&#39;s Alchemist Ed Shellard is the Executive Chef and owner of The Alchemist Gastropub (p.83), located in the Metropolitan building on Piłsudski Square. Ed is an Englishman, originally from Surrey, a businessman who has had success in Poland since moving here. He is a person that understands the local hospitality scene and the wider International community in Warsaw (and Poland) making him the ideal person to kick off our latest series of interviews with local based expats about life and work in the country. How did you begin your venture into the world of gastronomy? My Mother is French, which is part of my influence for cooking, having been &#39;forced&#39; to drink wine at the age of 4, eating strong cheeses by the age of 5. As a teenager, after a few seasons as a ski instructor in Switzerland and working in the kitchens, I came back to the UK and went to the Oxford school of Hospitality Management to do a bachelor’s degree in hotel and restaurant management. In my final year, one of the modules offered a year in the Hilton London Metropole in the kitchen and bar, as well as a year cooking in the Oxford Brookes University kitchens as part of a training chef’s degree. So you’re a bit of an Alchemist? That’s where the name came from - I’m always experimenting with various herbs and ferments. Right now I’m making my own antibiotics with unpasteurised honey and raw garlic which you leave to ferment for a year until it goes black - that’s how people used to survive bacterias before we had pharmacies! It’s got to the point that we’re now experimenting with CBD Cannabis infusion in one of our cocktails! Why did you choose to come to Warsaw? I first came to Warsaw 15 years ago. I was working on projects installing kitchen ventilation systems in hotels. 10

I remember thinking ‘there is barely any gastronomy here - I’ll keep my eye on this place’. I looked at opening something in the London area, but the competition, rents and deposits were insane, there was no way I could do that. After a quick attempt in Vancouver, Canada that didn’t turn out well, I decided to come here not speaking any Polish, not knowing anybody. I sold my house and put every penny I had into the Alchemist. I spent 6 months sleeping on peoples’ sofas, borrowing their cars, meeting real estate agents, trying to find somewhere that had good frontage and a garden with sun. Those were my two objectives because I’ve always been passionate about pubs and public houses and how they should be nonjudgemental and have a menu that caters to everyone. That’s what I wanted to bring to Warsaw; a modern version of this idea. How has life been in Poland since moving here? I love the simplicity of Poland, and as a chef, I love that it’s an agricultural country. I love eastern Poland where you can still see sights that look like something from the 1920s, where people still live off the land. There’s something about driving past an old Babcia [grandmother] on the side of the road selling mushrooms and jars of blueberries that just makes me stop and say ‘yup! I’m going to buy that!’, and I’m going to do everything I can to buy real vegetables from the people that grow and pick them.

Warsaw In Your Pocket is the best tourist guide to Warsaw on the market. Written in a witty, impartial and informative style, within our guide you'll find almost limitless amounts of info on what to see and do while in town, plus all the history and cultural background you could possibly wish for. Best of all, our travel guide is meticulously updated every two months so that it is as current and accurate as we can possibly make it. 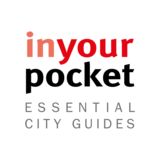