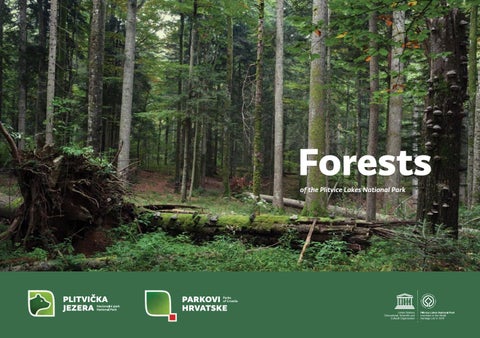 The Parkâ&#x20AC;&#x2122;s forests do not represent pristine nature because they have traces of human impact from the past. However, today they are left to develop naturally and not used for economic purposes.

Beech forests They occupy the altitude belt from 500 to 800 m above sea level. With regard to the geological surface, we distinguish two types of beech forests: dolomitic beech forests and limestone beech forests. They differ from each other in respect of plant content and, to some extent, appearance. In addition to the predominant tree species (beech), there are also sycamores, maples (Acer obtusatum) and an occasional wild cherry. Early spring is the most interesting of all seasons. The so-called spring aspect is dominated by herbaceous plants (anemone, liverleaf, snowdrop, dead-nettle, Cardamine polyphylla, etc.).

Before it was settled, the entire area of the Park (except water surfaces) was covered with forest vegetation. The establishment of permanent settlements brought about the need for arable land, so the inhabitants cleared some parts of the woods. That is why today forests cover ÂžÂ of the Parkâ&#x20AC;&#x2122;s surface. Vegetation depends on natural conditions, especially the climate, the geological surface and the relief, as well as on historical developments. The Park has two vegetation zones: beech zone (predominant) and beech-fir zone, which both represent climate-zonal vegetation, influenced by the climate of a particular area. Within these zones, the dominant influence of one or multiple ecological factors (soil depth, terrain inclination, exposure, availability or lack of water in the ground, etc.) lead to the development of hop hornbeam, black alder, grey willow, spruce and Scots pine forests.

Beech-fir forests These forests occupy the altitude belt from 750 to 1100 m above sea level, depending on exposure. They grow on a limestone surface with pronounced karst landscape features (sinkholes, limestone pavement, cliffs, more or less distinctive stone blocks). On such terrains, soil depths vary, providing more or less favourable conditions for the growth of forest trees. Such conditions give these forests diverse appearance in respect of the species, height, thickness and spatial distribution of trees. In addition to the predominant tree species (beech and fir), there are also sycamore, wych elm, European ash trees, etc. When it comes to herbaceous plants, it is important to mention the blue-eyed Mary â&#x20AC;&#x201C; along with beech and fir, it is an important species that makes up these forests.

Scots pine forests They are widespread in the south-west part of the Park, in beech-fir zones. These forests grow on southern dolomite slopes with shallow soil. Scots pine is the predominant tree species, but spruce is present as well. Among plant species, hellebores are the most attractive: black hellebore and lacy hellebore, spring heath, etc. S p r i n g h e at h scots pine forest

They appear in beech-fir zones as pioneer vegetation on forest clearings that are a consequence of bad weather (windfall, snow damage) and on deserted agricultural surfaces. They â&#x20AC;&#x153;patch upâ&#x20AC;? the newly created clearings in the woods as the transitional stage until the are overgrown with beech-fir forests.

This is an interesting forest because it developed under special edaphic and hydrological conditions â&#x20AC;&#x201C; in the beech-fir zone, the water and the soil influenced the development of the alder forest. The predominant tree species is alder, but there are is also European ash, spruce, etc.

It was created under the influence of several ecological factors such as the geological surface (limestone rocks on the surface in the form of stone blocks, ravines, shallow dry and very scarce soil). These forests mainly grow around the Korana River Canyon. Hop hornbeam and black alder are the predominant tree species, but there is also maple (Acer obtusatum), whitebeam, Cornelian cherry, etc. With regard to shrubs, it is important to mention Spirea cana. It is most attractive in early spring thanks to the blooming whitebeam, and mid-May because of the blooming black alder with its dominant white colour and intense scent.

Illyrian sessile oak-hornbeam forest It grows on steep southern slopes of Mala and Velika lisina, on a relatively small surface area. It is in a degraded stage, with smaller clusters of sessile oak.

Virgin forest Čorkova uvala Virgin forest Čorkova uvala is located in the north-west part of the Park, between 860 and 1028 m above sea level, in the beech-fir zone. It covers a surface area of 84 ha. It is a second-growth forest – developed without or with minimum human impact. As life processes in it are uninterrupted, this forest contains all development stages of all components of a virgin forest ecosystem. A strong impression is made by trees of different heights, thicknesses and ages (e.g. a silver fir over 500 years old, 58 m tall, with a diameter of 150 cm). The common beech and the European spruce also reach such large dimensions.

What happens in the virgin forest? In the virgin forest, constant changes take place in development cycles lasting multiple centuries. They include changes in the tree species ratio, the vertical layers, the thickness and number of dead trees, the amount of deadwood, the amount and size of gaps in treetops, likelihood of windfall and infestation of insects harmful to trees. Such phenomena do not affect the entire virgin forest at once, but occur in certain parts of the forest, resulting in a mosaic-like appearance. Why are virgin forests important? They are important for the preservation of natural heritage. These forests have a high degree of biodiversity and potential of genetic diversity. They are important because they give insight into the natural structure of forests. They are reference sites to assess the effectiveness of forest management.