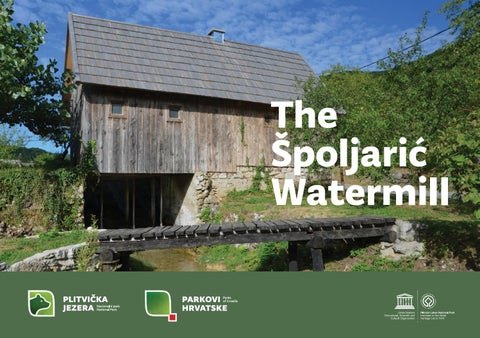 Powered by water, watermills are important traditional structures characteristic of the pre-industrial period. Through the system comprising a water wheel and a shaft, the power of water is transferred to a millstone which grinds grains.

In the area of the Plitvice Lakes National Park, watermills were built on the banks of rivers and lakes, and some were constructed on tufa barrier cascades. Tufa was often used as a construction material and is characteristic of the local traditional building. Throughout the history, around 30 watermills with spoked water wheels were built within the current borders of the Plitvice Lakes National Park, but only three remained. Today, these watermills represent important cultural and architectural heritage. Aside from watermills, the power of water was used for driving saws, presses and even small hydropower plants.

The Špoljarić Mill The Špoljarić watermill on the Korana river is located in the village of the same name and is the only communal watermill used by the inhabitants of villages Korana, Drežnik Grad, Irinovac, Korita, Kuselj, Matovinska Lisina, Poljanak, Rastovača, Selište, Sertić Poljana and Smoljanac. Of the six watermills that existed in Korana, only this one has been preserved. Thanks to the effort of the inhabitants of Korana, especially the Špoljarić family, the mill has survived wars and stood the test of time. The watermill was built on a tufa surface in the 19th century. The retaining wall is built of stone and tufa blocks. Heavy

massive beams, the so-called podumjente, lean against it. Originally, the massive beams supported rafters with sill plates and a double-pitched roof covered with split face wooden tiles, i.e. shingles. The interior of the watermill is divided into the miller’s room and the milling room with three milling devices. The miller’s room is modestly equipped with only the most essential furniture and tools: there is a bed with a woolen blanket (biljac) and colourful bedding (šarenica), a table with chairs, and a closet—all characteristic for the local craftsmanship, as well as cutlery and tools used for darning bags and making spokes for the water wheel. There is always some food and local fruit brandy from Lika in the miller’s room. The milling room consists of an outdoor and indoor installation. The outdoor installation at the front holds a dam with a water-gate for adjusting the water supply. Attached to the dam and the water-gate is a grooved sluice, positioned at a 35 degree angle, 3–5 metres in length from the gate valve to the water wheel. Each sluice has its own gate valve that is opened by a steel wire coming from the indoor installation of the watermill. By lifting the gate valve, water is channeled through the sluice to the water wheel. The indoor installation is situated inside the milling room and consists of three milling devices. Each device consists of two millstones—the upper (runner) stone rotates, while the bottom one (bedstone) is stationary. Above each stone

there is a basket with grains with a mechanism below it that regulates the feed of grains to the millstone. The mechanism regulating the height of the gap between the stationary bedstone and the runner stone is situated on the floor, just in front of the wooden case (kištra) with flour. The third mechanism in the milling room is the abovementioned mechanism for opening the gate valve at the sluice front. The runner stone is connected to the vertical shaft—the axle that carries the water wheel. The millstone is shaped or carved out of a single stone block and used in operation for many years. A cylinder-shaped stone is additionally reinforced with metal bars on the outside. The running stone and the bedstone are matched by their different structures and densities. Stones of higher quality with more pure granite and flint content are required for milling grains. The stones were re-cut or dressed every 8 to 10 days, depending on the quality and quantity of the milled grains. The stones blunted faster if the grains were raw, wet or dirty. The process of milling the grains is called meljava (grinding) and the final product is melja. According to the type of grain milled in/by the watermill, there are white (belac) and black (crnac) watermills. A white watermill is used for milling wheat (rye and barley) and has an additional system for sifting the ground product with a linen sifter, which separates flour from bran. A black watermill is used for milling corn, rye, barley, millet, oats and wheat, and has no system for separating flour from bran. Grains are brought into the watermill in bags of different sizes.

outdoor installations of the watermill, regulated the watercourse, took care of the mill’s surroundings and carried out a number of other tasks. Diligent miller Zlatko Špoljarić from the village of Korana has been taking care of the Špoljarić watermill for years. The last reconstruction of the watermill was carried out in 2002 under the expert supervision of the Conservation Department of the Ministry of Culture. The roof was covered, walls were panelled in wood, ceilings and floors were replaced, carpentry was built in and the interior of the building was equipped in the reconstruction. The mill is property of the Republic of Croatia and it is managed by the Public Institution of the Plitvice Lakes National Park in accordance with the Nature Protection Act.

Old measuring units such as almud (vagan), quarter (četvrtinka) and cup (kupljenik) were used. The milling service was paid with ujam or ušur in kind, i.e. from the grain brought, the miller took 8–10% of the total quantity for his service. In addition to milling in the communal watermill, the miller kept the millstones sharp, maintained the indoor and

As the grind of the millstones blends with the burble of water and waterfalls, this old mill bear witness of the ancient bond between man and nature. Getting to know the history and tradition of this region can be a sufficient reason to visit the Špoljarić watermill in the village of Korana.