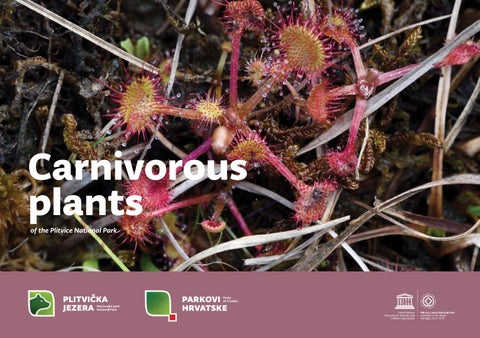 The Plitvice Lakes National Park is an area known to have over 1400 plant species. The plants that — due to a lack of nutrients in the surface on which they grow — trap animal prey are particularly interesting. They are called carnivorous plants. Such plants are very unique and do not have many representatives in the world of plants. The mires* of the Plitvice Lakes National Park, which are particularly poor in nitrogen compounds, are the home of three types of carnivorous plants, out of the nine found in Croatia.

All three of them have the so-called active prey trapping mechanism — their leaves are adapted to move and actively trap animals, mostly small insects, on which they feed.

Description and ecology Round-leaved sundew (Drosera rotundifolia L.) is a plant that grows in transitional bogs recognisable by moss of the Sphagnum genus (peat moss) that predominates in this habitat. The small, 5–12 cm tall plant has tiny round leaves densely covered with red moveable glandular hairs. The flowers are small and white, with sometimes up to 15 of them in a blossom cluster. The Plitvice Lakes National Park has one of the best preserved transitional bogs in Croatia. The meaning of the name Greek droseros = dewy, dewdrops (drops of mucilage from the glandular hairs on the plant’s leaves resemble drops of morning dew) + Latin rotundus + folius = with round leaves.

Trapping mechanism When a tiny insect lands on a sundew leaf, the glandular hairs, triggered by the stimulus, move towards the location of the prey. They cover the prey with sticky mucilage and stay in that position until they dissolve the animal to free and absorb the nutrients contained within it – till there is nothing left but the chitinous shell of the prey.

Description and ecology Lesser bladderwort (Utricularia minor) is a very rare plant in the Croatian flora. Along with the characteristic mire species such as peat moss Sphagnum sp., round-leaved sundew Drosera rotundifolia L. and others, it was first registered in 1974, in the transitional bog in the Plitvice Lakes NP. According to the exiting data, this is the only known recent finding site of lesser bladderwort in Croatia. The stems are gentle and soft, like a thin thread up to 25Â cm long, with alternately arranged leaves and bladders of about 2Â mm in diameter, and they grow completely under water. Only the pale yellow flowers rise above the surface of the small puddles in the mire. The meaning of the name Latin utriculus = small leather bag, bagpipe, bladder + Latin minor = minor (the smallest species of the Utricularia genus).

Trapping mechanism Lesser bladderwort lives under water, more or less attached to the surface, and traps prey with special deadly traps shaped like little round bladders. When a tiny crayfish or some other small aquatic organism enters the bladder, it quickly dies and then gets dissolved by the mucilage secreted by the tiny hairs.

Description and ecology Common butterwort (Pinguicula vulgaris) abounds in fens which are part of the wet meadows in the Plitvice Lakes NP. It is 5–10 cm tall. It has recognisable purple flowers and thick, wide leaves of 7–10 cm in diameter in a terrestrial rosette. According to the International Union for Conservation of Nature (IUCN), it is a critically endangered (CR) species due the disappearance of its habitat, water regime change, etc. The meaning of the name Lat. pinguis = fat, tick (because of “thick” glossy leaves) + lat. vulgaris = common.

Trapping mechanism When an insect lands on a butterwort’s leaf, it is trapped by the secrete from glandular hairs, and then dissolved and absorbed.

*What is a mire? A mire (quagmire) is a specific biocenosis (community of organisms) of a wetland characterised by a lack of nitrogen in the soil. There are two main types of mire: fens and bogs, among which we distinguish transitional and raised bogs. Both types of mire are found in the Plitvice Lakes NP. Bogs (peat bogs) have a highly acidic reaction, and the moss of the Sphagnum genus (peat moss) is dominant and characteristic for such areas. Peat is created by the accumulation of dead plant material that decays very slowly due to anaerobic conditions in the soil caused by water retention.

Fens are fed by alkaline groundwater, so the soil reaction is mostly alkaline, and the plants are in contact with the geological surface through the water. There is no Sphagnum genus moss (peat moss) in fens. Mires are remnants of the ice age. The climate in Croatia is too warm and too dry for optimal development of fens, which why they are disappearing. Today, fens are one of the most endangered and smallest (in terms of surface area) habitats in Croatia.