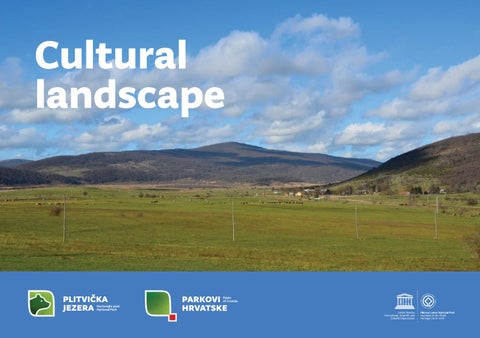 Cultural landscape is the result of interaction between human and natural factors during a certain period of time. Consequently, the landscape is transformed over time due to changes in the factors that create it.

Cultural landscape is the result of interaction between human and natural factors during a certain period of time. Consequently, the landscape is transformed over time due to changes in the factors that create it. In the past, the main activities in these areas were agriculture, animal husbandry and forestry. There are several recognisable types of cultural landscape in the preserved settlements within the Plitvice Lakes National Park. Among them, we can distinguish three recognisable types shaped by the natural environment, traditional activities and use of space. They are all characterised by the same traditional method of construction.

The first type are wide grasslands, meadows, pastures, arable land in karst fields and their traditional settlements with an open structure and regularly shaped yards. The most preserved examples of this type of landscape in the Park are the areas around the villages of Homoljac and Gornji and Donji Babin Potok, i.e. the stretch of land along road D52, from Borje to Donji Babin Potok. The houses were built along the edge of a field, at the foot of a hill, so that fertile land could be used for agriculture. The edges were at a lower risk of flooding and better protected from cold north winds. They also allowed easier defence against and escape from enemies (in wartime).

The second type are forest clearings, meadows in woodland areas and their settlements, characterised by scattered houses with irregularly shaped yards. Such villages are comprised of several houses, specific for the area of Plitvice. The areas where this type of landscape is best preserved are Drakulić Rijeka, Končarev Kraj, Uvalica, Kapela Korenička and Rodić Poljana. The third type are settlements by rivers and streams, built because of traditional activities connected with the use of rivers and streams (grinding mills, fulling mills, sawmills), such as the villages of Korana, Plitvički Ljeskovac, Vrelo and Rudanovac. The main elements of a farm are the house, farm structures, a yard, a hedge or a fence, a garden and an orchard. The settlements differ depending on the natural environment in which they were built and the particularities of human activities performed in them. The houses are single-storey buildings, either entirely made of stone or just with a stone cellar, covered with rafters, from the outside longitudinally connected by a plank whose joints are covered with narrow boards for better insulation. The other type of insulation applied from the outside is lime mortar, while the binding material that holds lime mortar on the rafters are narrow boards mounted at a 45° angle.

The houses have two or three rooms, and the attic was used for storing grains (corn, wheat, oats) and drying meat. The roof used to be covered with shingles. Later on, fibrolite, fibre cement, clay tiles and sheet metal were used for that purpose. In the yard, opposite the house, there would usually be a stable, with other farm structures (threshing barn, pigsty, chicken coop, drying house, etc.) on the sides. Thus, the holding would usually be enclosed by buildings and a high fence in a rectangular layout, so nothing inside the yard could be seen from the road. Next to the house, there would always be an orchard with plum trees. The plums were used to make rakija (brandy) and marmalade. There were very few apple, pear, cherry or walnut trees compared to plum trees. Cisterns (water tanks), wells and pools were used for water supply. A cistern is an underground structure for collecting water, approximately 3 m in diameter and 4–5 m deep. It is made of stone blocks and filled with water from roof gutters. A well is similar to a cistern—the only difference is that it is filled with water from the surrounding terrain or groundwater, or located near some source of water. Pools are hollows in watertight surfaces, filled with the water running off the road, usually used for watering livestock. The Park area abounds in springs and streams. Some of them are permanent, while others appear only after profuse precipitation. They are also used for water supply.

In winter months, livestock are kept in stables and fed with hay collected during the summer. In the past, hay used to be stored in haystacks on fields and transported to stables and threshing barns as necessary. However, this method has been abandoned because of technological advances, and nowadays people use balers. Other activities include beekeeping and honey making, as well as the production of berry juices and liquoeurs. Flour mills for grinding grains and sawmills for preparing construction wood were built in settlements with rivers and larger streams. In general, the mills were communal, which meant that each village had the right to grind grains on a particular day of the week or month. Unfortunately, with the introduction of electricity, such water-powered grinding mills and sawmills became obsolete. Today, the only preserved, restored and functional grinding mill and sawmill are those in the village of Korana. Most clearings are grasslands and fields used for agricultural production and animal husbandry. The grasslands and fields are located on flatter or slightly sloped parts of terrain for easier tillage. Woodland areas start from steeper slopes and inclines, so this limit is clearly visible on the terrain. Animal husbandry is most represented by cattle and sheep farming, and the final result is the production of milk and dairy products, which are normally sold on the doorstep. Livestock are grazed in the spring, summer and early autumn, when there is a lot of grass.

Other settlements in the Park gradually lost their traditional landscape features due to socioeconomic changes and the disappearance of the traditional way of life to a greater or lesser degree.