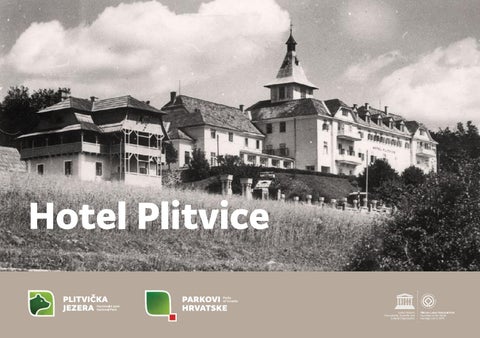 The first Hotel Plitvice in Velika Poljana was built as a project of Josip Dryak in 1896. It was the first modern hotel in the Plitvice Lakes area â&#x20AC;&#x201D; several private villas had been built in Velika Poljana before the hotel because of the attractive location.

The present-day Hotel Plitvice was built in the period between 1954 and 1958. It was designed by the Haberle Architectural Firm headed by architect Marijan Haberle. The hotel is one of the finest achievements of Croatian post-war architecture â&#x20AC;&#x201C; not only because it is neatly incorporated into an extremely sensitive landscape, but also because of the particular design of the building. The hotel comprises three wings on multiple storeys, which form an architectural unit in a T-shaped layout. It can be said that the larger wing serves as the residential part of the hotel, while the north wing, which runs vertical to the other two, is a commercial part for day-trip tourists. It should be noted that the entire hotel was facing the main road that ran through the Plitvice

Lakes area and passed along the south side of the hotel at the time of its construction. The irregular shape of the hotel is adapted to the topography of the land and separates the hotelâ&#x20AC;&#x2122;s facilities in a functional way. The hotel is situated on an elevated plateau near the edge of the forest, facing the lakes, and its layout follows the edges of the sinkhole on the west side of the hotel. Some of Croatiaâ&#x20AC;&#x2122;s best architects of the time tendered to design the hotel. An interesting fact is that the design according to which the hotel was constructed did not rank first, but second in the tender. In the end, the final design

of the hotel also comprised some of the solutions taken from other bids. Special attention was given to decoration, which included the painting of the façade and the use of locally sourced natural materials such as wood and rock, as well as polished and unpolished stone. In addition to contemporary construction materials, natural materials were used to honour local traditional construction techniques. Once completed and opened, the hotel offered 173 beds. The hotel was adapted and reconstructed in 1977. The hotel parlour was converted into the lobby, while the former entrance hall was repurposed as service and office space. The closed part of the tourist restaurant was expanded by moving the glass wall up to the external pillars supporting the roof construction. According to Haberle’s collaborators, Haberle reluctantly accepted these alterations. The interior of the residential space was refurbished during the 1997 adaptation.

The increase in room surface area in accordance with contemporary hotel standards resulted in a reduced number of rooms (from 70 to 51), with three different dimensions and levels of equipment, and one suite. Unfortunately, the part of the hotel with a terrace open for tourists was not renovated, but a renovation of the entire hotel is planned in order to upgrade it to a high-quality hotel.

Hotel Plitvice is a protected cultural object entered into the registry of cultural objects under designation Z-3857. The first Hotel Plitvice in Velika Poljana was built as a project of Josip Dryak in 1896. It was the first modern hotel in the Plitvice Lakes areaâ&#x20AC;&#x201D;several private villas had been built in Velika Poljana before the hotel because of the attractive location. The front of the hotel was facing the lakes.

The layout of the hotel was an elongated, fragmented rectangle positioned along the isolines of the terrain. A belvedere was set in the middle of the hotel and it dominated the view of the hotel. The hotel had a restaurant and 28 rooms, but it burned down in a fire in 1939. The Society for the Beautification of the Plitvice Lakes intended to build another, bigger hotel with 200Â rooms, but that plan was abandoned due to World WarÂ II.