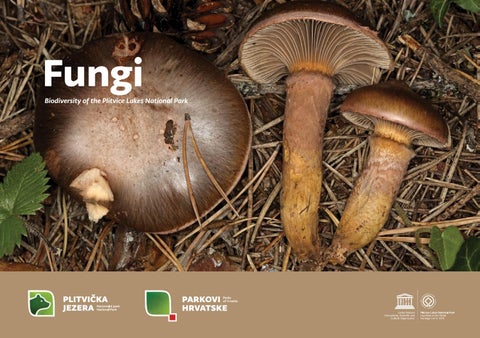 Fungi make up one of the kingdoms of eukaryotic organisms (their cells have a nucleus). Although around 140.000 species of fungi are known today, it is estimated that at least 3 million species currently exist on Earth. Except for a small number of unicellular species (yeasts), fungi are multicellular organisms. Since they do not possess chlorophyll, fungi cannot synthesize organic compounds out of inorganic elements, so they are counted amongst heterotrophic organisms. Fungi have three basic feeding strategies: (1) saprotrophs break down decaying organic matter, (2) symbionts (mutualists) engage in an interaction with autotrophic organisms (plants, unicellular algae or cyanobacteria), forming a mutually beneficial relationship (mycorrhizae, lichen community), and (3) parasites derive their nutritional requirements from other living organisms, causing them harm in the process. More than 95% of species of fungi belong to the phylum ascomycetes (Ascomycota) and basidiomycetes (Basidiomycota).

The National Park Plitvice Lakes is an area with exceptionally high biodiversity. In addition to animal and plant species, the area of the park is teeming with fungal species. Up to now, more than 800 species of fungi were recorded, which represents only a minor part of overall fungal biodiversity that has yet to be fully explored.

The greatest fungal biodiversity can be found in the primeval forest of Ä&#x152;orkova Uvala. The main reason why this area is so favorable for fungi is the combination of trees that comprise the forest: beech, fir and spruce. All three of those make excellent partners for numerous species of mycorrhizal fungi as well as a first-class substrate for many saprotrophic fungi. Another particularly important reason for the exceptional value of this habitat is the primeval type of forest developed on this locality. That development occurred because of strict habitat protection and a lack of human activities (besides research activities) over a period of many years. There is a significant number of endangered fungal species (77 species), especially species (over 60), that were so far found in Croatia only in the forest habitats of the Park. Most fungi lead a hidden way of life. Their bodies (called mycelium) are hidden in the ground, in the leaf litter, fallen branches and other substrates. Mycelium looks like very thin, richly branched threads. During specific period of the year, if the weather conditions are favorable, fungi will form fruiting bodies - special organs in which microscopic corpuscles, called spores, used for reproduction and spreading are developed. Fruiting bodies can be differently shaped and coloured and most often do not last long. Fungi are a large and exceptionally important group of organisms. Without them, life on Earth as we know it would not be sustainable. They have crucial roles in the functioning of terrestrial ecosystems. The two most important of those roles should be particularly mentioned.

1 â&#x20AC;&#x201D; Saprotrophic fungi (together with bacteria) decompose dead organic matter into inorganic elements and thus enable the circulation of matter in nature. They are especially important in the decomposition of plant remains. 2 â&#x20AC;&#x201D; Mycorrhizal fungi form a symbiotic relationship by their mycelium with the root system of plants. This relationship is called mycorrhiza. The fungi provide mineral nutrients and water from the ground for the plants, and plants in turn provide products of photosynthesis in forms of sugars for the fungi. The mycorrhiza with forest trees is especially important for the health of forest ecosystems. The forests of Plitvice Lakes National Park are the types of habitat richest in fungal species. A typical, very common

species found in beech and mixed beech forests is the garlic parachute Mycetinis alliaceus. It is a saprotroph that feeds on leaf litter and fallen beech twigs. It is notable for its intense garlic odour. One of the rarest beech forest fungi found in the park is Cystoderma carpaticum. It is typical for primeval forests, where it lives as a saprotroph feeding on large beech tree trunks. So far, it has been found in only two European countries. A common, typical fungal species found in fir woods is the rosy woodwax Hygrophorus pudorinus, which forms mycorrhizal relationships with fir trees. One very rare species, which serves as a good indicator of primeval forest habitats that contain firs and spruces, is Gymnopilus bellulus. This species lives as a saprotroph feeding on large

with scots pine. The lilac milkcap Lactarius lilacinus is a rare but typical species that lives in mychorrhiza with alders. Fragile amanita Amanita friabilis is even rarer, and the only known site in Croatia is situated in the Park. Fungi usually live on the ground or plant substrates of terrestrial habitats. However, some species differ from the majority. Ascobolus furfuraceus is commonly found on the feces of various wild and domestic animal species. In the Park, this species was found on the feces of brown bears. Polydesmia pruinosa is a parasite on other fungi, while Vibrissea calcaria feeds by decomposing sunken branches and twigs in mountain creeks and rivers.

A very rare species, which serves as a good indicator of primeval forest habitats that contain firs and spruces, is Camarops tubulina. This species lives as a saprotroph feeding on large tree trunks. Scots pine forests cover smaller areas of the Park. A typical species of fungi in these forests is copper spike Chroogomphus rutilus, which forms a mycorrhiza with pines. Additionally, Hygrophorus gliocyclus is a rare fungal species in Croatia that lives in mycorrhiza

tree trunks. The most common fungal species in the forests that contain spruces is yellowleg bonnet Mycena epipterygia, which lives as a saprotroph feeding on leaf litter and wood remains.