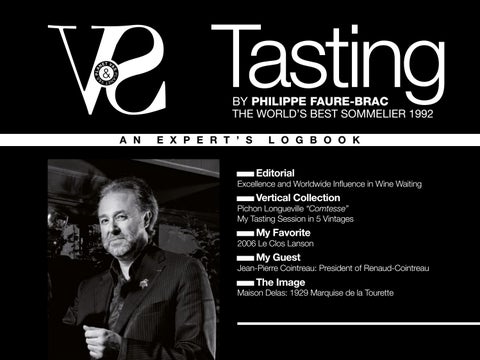 assion, training, dissemination... These are the focal points of the Union de la Sommellerie française for the next three years. The French approach to practicing the profession, like French gastronomy, establishes a worldwide reference. However, to ensure that it continues to be exemplary, we must continuously develop the profession. Passion is the engine that drives all action. Sommeliers experience this reality each day through their curiosity and the opportunity to share their knowledge with lovers of fine wines. Training is the essential instrument that enables generations to renew themselves. Training is geared to adapting to the expectations of restaurateurs, customers and sommeliers themselves. Dissemination is the DNA of sommeliers, that we can liken to the passage of information between

A FEW WORDS ON

PHILIPPE FAURE-BRAC He is like a fine wine, improving from one year to the next. Philippe Faure-Brac has become a point of reference within the sommelier profession. His name remains synonymous with extensive wine knowledge, but going forward, he seeks to diversify the channels through which his message can be heard. Late 2016 sees him leading the French wine waiting establishment and seeking its modernization. One year earlier, Philippe Faure-Brac was named “Best worker in France Honoris Causa” within his domain. Moreover, he is a long-standing radio broadcasting fixture. He is also releasing a 600-question game about wine. All of this in addition to his “Sommelier’s Bistro” where he organizes “Vendredis du Vigneron” (“Wine Grower Fridays”) events. Two words describing Philippe Faure-Brac’s life are “discovery” and “sharing”.

wine producers – for whom we act as ambassadors – and the wine enthusiasts that we have the pleasure of guiding in their choices. In November, the UDSF’s 1300 French sommeliers selected me to lead the organization, as successor to Michel Hermet. I am certainly honored by this vote of confidence, but beyond that, I understand the obligation it entails. Along with the team that will support me throughout this three-year term, we have the duty to continue to develop our magnificent profession. Just like French chefs who now face stiff competition from capable foreign professionals, sommeliers must also contend with the development of expertise beyond our borders. Our generation must therefore “pass on the keys to the cellar” to the next one under the best possible conditions. We must also be united to ensure excellence and worldwide influence in wine waiting!

LE BISTROT DU SOMMELIER Being top in his field seems to be ingrained in Philippe Faure-Brac’s DNA. He was only 24 when he opened his «Bistrot du Sommelier» at 97 du boulevard Hausmann in Paris. He is the first representative of his field to design a restaurant based on wine and thousands of references. Its chef, Guillaume Saluel, creates a menu every month using seasonal market produce. Here, the product is highlighted and is prepared to work in perfect harmony with the sommelier’s wines. Open every day for lunch and dinner. Closed at weekends. Tel: 00 33 (0)1 42 65 24 85 www.bistrotdusommelier.eu

It combines power and elegance. The body is ample and dense, and the tannins blended. What is the secret? Ripe Cabernet Sauvignon grapes and juicy Merlot grapes!

One of the particularities of Château Pichon-Longueville Comtesse de Lalande is that it is divided between the vineyards of Pauillac (74 ha) and Saint-Julien (11 ha). Since the middle of the 19th century, two families have made it one of the greatest Bordeaux wines. The Château was purchased in 2007 by “Louis Roederer”. Nicolas Glumineau and the new owners have launched an extensive vineyard restructuring program. They have fully renovated the winemaking equipment and renewed production methods. www.pichon-lalande.com

2003 PICHON “COMTESSE” A great terroir is not simply a matter of the wine-growing soil, but also presupposes a unique environment. The nearby river creates an exceptional microclimate that favors slow and full ripening -even during 2003’s heat wave. A wine full of chewiness and pleasure that can be aged for a long time.

2005 PICHON “COMTESSE” An exceptional vintage, with a balance between power and finesse. A silky intensity and texture associated with subtle aromas of fresh fruits heralds a very high cellaring potential, ensured by Cabernet grapes that are very typical of their terroir.

Pichon-Longueville Comtesse de Lalande can certainly pride itself on its “super second” status (listed cru). This is particularly owing to the 8 exceptional vintages from the 1980s. It is a “made-in-Pichon Pauillac” that serves both as an aspiration and a point of reference.

2010 PICHON “COMTESSE” When Pauillac offers an exceptional vintage, the Cabernets are straight as an arrow and precise to the extreme. The rich, voluptuous Merlots ensure the powdery and silky envelope of a highly elegant wine. A future monumental “classic”, this 2010 “Comtesse” will never cease to please.

2015 PICHON “COMTESSE” The worthy successor of a line of very great “Comtesse” vintages, this 2015 was vinified in the new cistern. In developing it, Pichon drew inspiration from 1982, 1989, 1996 and 2010 vintages. Power, refinement, strength and elegance. Both demanding and dreamlike. La Comtesse is a complex grand lady who does not easily give up her secrets. You must go seek her out...

What I like about the wine is the combination of Pauillac’s southern power and Saint-Julien’s finesse. Pichon “Comtesse” has the advantage of growing in a terroir that gives rise to these two facets. 3

Founded in 1760, Lanson is one of the oldest champagne houses. In 2006, it joined forces with Boizel-ChanoineChampagnes to form the Lanson-BCC Group, chaired by Bruno Paillard and comprised of seven houses producing Champagne wines. Led by Philippe Baijot, Lanson has preserved its specific style and taste. An extensive modernization plan, spanning 2013 and 2018, seeks to “improve quality and increase commercial responsiveness and international influence.”

This champagne is unique. It is the only one to be 100% grown in the commune of Reims. Its Chardonnay grapes are grown on a one-hectare plot preserved by the Lanson family. The view is exceptional: the vineyards were replanted in 1960 and 1986, and are aligned with the cathedral. They benefit from a microclimate, sheltered from the wind. The subsoil is white chalk. The grapes are harvested by the house’s employees. Philippe Baijot had the idea for this exclusive cuvee in 2006. The cellar master indicates that this “elite” champagne is aged 9 years. www.lanson.com

Cellar master Hervé Dantan recommends opening a bottle of Clos Lanson as an aperitif. It makes an exceptional aperitif. Prior to savoring it, take a moment to admire “the light gold robe, crowned with tiny bubbles.” With a very low dosage (3 g/l), the precious beverage is a brut nature champagne. This is indeed a great champagne that would be perfect in combination with scallop/cilantro/citrus, and more generally with shellfish and the most delicate fish.

The wine world is abuzz about this 2006 Clos Lanson, that very few people have had the opportunity to taste. However, I think that it would make a lovely Christmas gift! 4

practicing living heritage”. Only two champagne houses and two cognac houses have received this title. While very ancient, our brands have adapted to modern times.

Frapin cognac and Gosset champagne are the properties that spearhead the sales of this family company run by Jean-Pierre Cointreau. Champagne, cognac, liqueurs, syrups… You deal in many markets. How are you coping with global instability? Exports are the key to our success, both in Asia and the United States. The European market is more mature and therefore more stable. To date, the arrival of Donald Trump, Brexit and oil prices have not led to any negative impacts. Our growth comes from champagne. You are currently developing through external growth. Are any acquisitions planned for 2017? No. Champagne is a sector of excellence. Cognac is more particular, since we are both wine growers and merchants. Our liqueurs and syrups represent many brands. Our efforts are focused on the USA and the Chinese market. Frapin cognac offers a wide range of products, with the Chinese consuming more VSOP than XO. We steer our development based on the qualities that they purchase.

Are modes of consumption changing? The consumption of cocktails is developing worldwide. In the liqueur sector, we started on this trend very early. Although Frapin and Gosset are best consumed on their own, we know that 70% of them are mixed. The best ingredients make the best cocktails!

PRESIDENT OF RENAUD-COINTREAU Jean-Pierre Cointreau holds the reins of the family group with a combination of firmness and grace. After studies in law and at business school, he began his career as an auditor, and then moved on to the perfume sector, before joining the wines and spirits sector in 1980.

How do you explain how well Gosset and Frapin have performed? Twenty-five years ago, we made the right choices, both in terms of the family business and premium products. The State has recognized our excellence: our business lines have received the label “business

Through the Cassisium in Burgundy, you are promoting Spiritourism... Of the 1 million visitors to France, we have hosted 50,000 at the Cassisium. For champagne and cognac, this is not our business direction.

RENAUD-COINTREAU GROUP Named after Jean-Pierre Cointreau’s mother and father, this group emerged in the 1980s with Frapin cognac, which had belonged to the same family for 20 generations. He then expanded the business to include Verveine du Velay Pagès, syrups and liqueurs in Burgundy, and Gosset champagne. The group sells one million bottles of champagne (60% exports), 500,000 bottles of cognac (95% exports), and 4 million bottles of liqueurs (45% exports). It employs 160 people in 4 main sites. RenaudCointreau is present in 96 countries. www.renaud-cointreau.com

the image TASTING MEMORY My greatest memory of Maison Delas was a 1929 “Hermitage, Marquise de la Tourette”. I bought a cellar from a friend. He had lovely vintages, including two bottles of this 1929 vintage. I kept one. The other one I tasted at the “Bistrot du Sommelier” in the company of great Rhone Valley wine enthusiasts. The wine had maintained a definite presence and intensity. A great wine in all its fullness, tasted simply for the pleasure of sharing it. A magical moment. (Philippe Faure-Brac) LA MAISON DELAS FRÈRES Since 1996, Maison Delas Frères, whose roots date back to 1835, has regained the soul and spark that contributed to its renown. At the instigation of the new direction, many investments have been made. We are witnessing the qualitative renewal of this great Rhone Valley house. www.delas.com