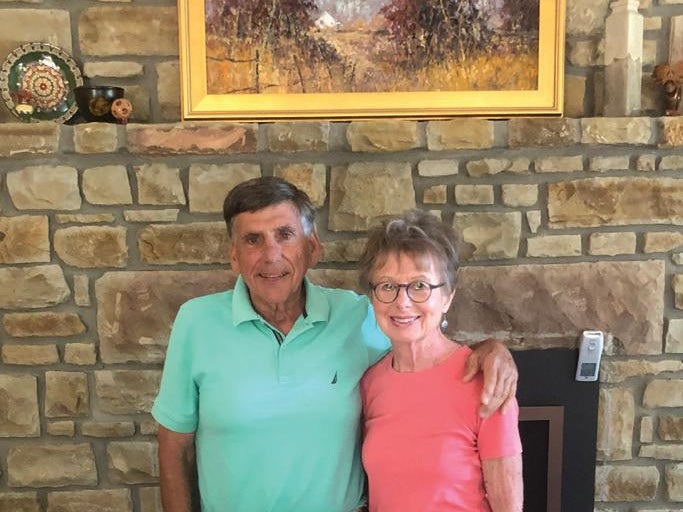 Mike and Jaydene Laros and Fon...

~story and photos by Boris Ladwig

Indiana native Adam Egenolf went to the University of Southern Indiana to become a math teacher. An elective class in pottery changed his life.

Egenolf, who grew up on a farm on the Greene/Owen counties line, took to the craft immediately and learned the tools quickly. The craft’s science—glazes, chemicals, heat and experimentation—appealed to his analytical side.

He started selling products in school and thought that if his parents could make it as farmers, he could figure out how to live off pottery.

He changed his career plan, got a master’s in fine arts from East Carolina. It was 2008, and he had created pottery all winter, then went to 32 trade shows that year to sell his works.

Revenue has increased each year for about 15 years, he said.

He keeps customers interested by changing designs, colors, and products, from serving plates to vases, mugs and utensil holders, bowls and planters, as well as art that can be hung on walls. Last year, during the pandemic, Egenolf, 42, and his wife, Barbie, began making letters and Christmas ornaments that can be hung on trees or in windows.

The secret of his designs lies in the metals he uses in the glaze and the temperature sequences to which he exposes his pieces. The composition of the metals, the height of the temperatures, and the duration of the exposure can drastically change the look of the finished product. Copper makes a green color, iron a brown, cobalt a blue. Nickel in crystalline form is blue, but in glass it produces a tannish color. Erbium, one of the rare earth metals he uses, produces pink.

Egenolf has tweaked his glaze recipes over the years through experimentation, by exposing the glazes to different temperatures and temperature combinations. A couple of degrees difference can change everything, he said.

His six kilns, which cost about $4,000 each, can be programmed to change temperatures during the firing process. Some products get exposed to two dozen temperatures. The first firing process, at temperatures of 1,850 degrees, turns the clay into stone, the second, with temps of about 2,350, comes after he applies the glaze.

No two products are the same, Egenolf said.

Except for the clay, Egenolf buys every component raw. He has seen significant price increases, especially for rare earth metals. Lithium, for example, cost about $400 for a 50-pound bag about five years ago. Now it costs about $2,400.

Egenolf used to go to about 20 trade shows a year, but the pandemic has forced him to change his business model a bit. While shows still account for about 50% of revenue, sales through Etsy now make up 35%, with business through galleries, from Michigan to North Carolina, accounting for the rest.

“I can’t tell you what day of the week it is half the time,” he said.

However, he said, as independent business owners, the Egenolfs can take time off when they want. They might take a few days off for fall break, for example, to take their children Archer, 10, and Violet, 8, hunting and fishing.

And, he said, even after crafting thousands of items per year for more than a decade, sitting down on a stool, placing his foot on the pedal and his hands on a soft piece of clay still serves as a kind of therapy.

Prices for the works are based on size. Vases get a price based on height, trays on length, platters on diameter. A 19-inch platter, for example, goes for $225.

His customers include Hollywood and rock royalty, such as singer John Mellencamp, actress Meg Ryan, and former Rage Against the Machine guitarist Tom Morello. Some of his fans have bought his works for more than a decade.

“There’s people who own more of my work than I do,” he said.

One of his repeat customers is Bloomington-based interior designer Diana Paxton, who commissioned Egenolf to create a wall-hung sculpture for The Seasons Hotel in Nashville.

The piece consists of four rows of four squares depicting trees in each of the four seasons. Egenolf has created similar works, though usually consisting of just four squares,

Paxton, who conceived of the hotel’s new look, asked Egenolf and other local and regional artists to create pieces.

Paxton began collecting Egenolf’s work about a decade ago, a mug at a time, and had him design a vessel sink for her home. When she began working on the hotel, she thought to contact him to contribute.

His piece was delivered in May, and it serves as one of the focal pieces in the entrance area.

She said she loves Egenolf’s crystalline glazes. The science that goes into Egenolf’s art is “just astounding,” Paxton said.

Egenolf and his family are keeping so busy that their 1,200-square-foot workshop at their home near Sweetwater Lake is getting too small. He said he’s adding another 1,500-square-foot building, with two additional kilns, though the new building will be used primarily for temperature-controlled storage. And it will give Egenolf more elbow room to create his works of art.

You can purchase some of Egenolf’s work at Spears Gallery next to the Nashville House in downtown Nashville.