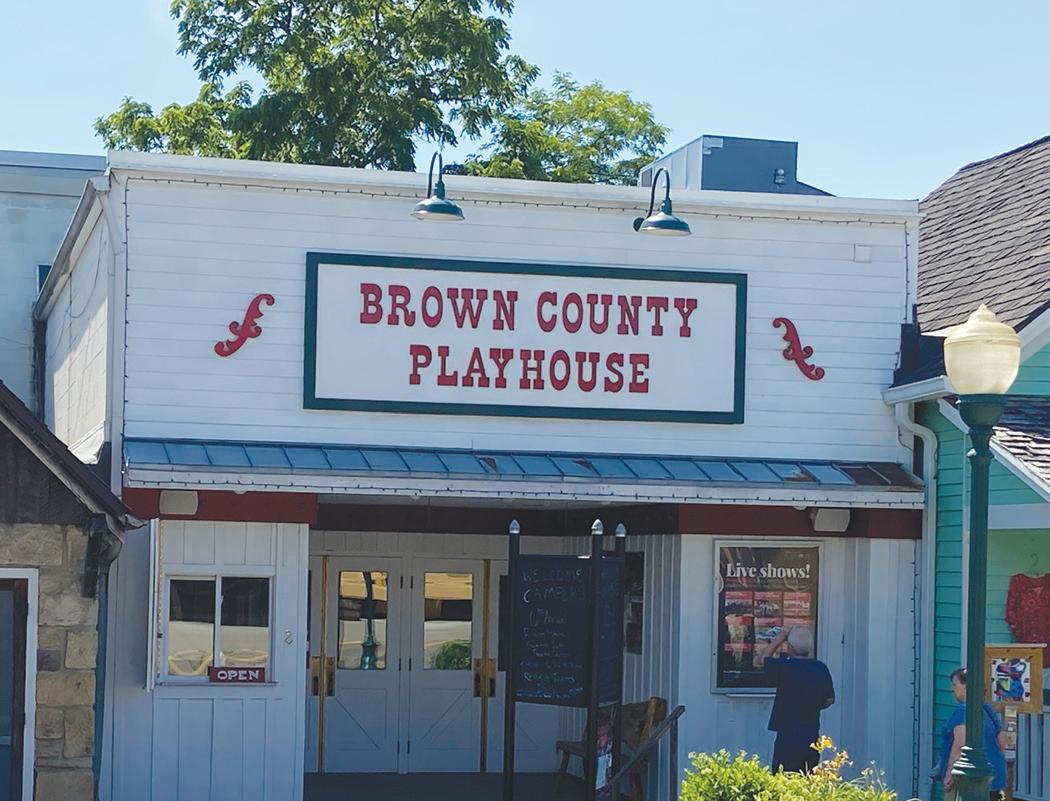 ~story and photos by Paige Langenderfer

Brown County artist and Hoosier Master Tim Greatbatch will be the first living artist to be showcased by the Brown County Art Gallery’s Collectors’ Showcase exhibition this October.

“Tim is a highly honored and collected artist, who in mid-life made a calculated choice to live and paint in Brown County, as did members of the early colony,” said Lyn Letsinger-Miller, President of the Brown County Art Gallery and Museum Board. “They left careers in cities and states at midlife and moved to Brown County to follow a career in fine art.”

As opposed to other Showcases, Tim’s art will be for sale with part of the proceeds benefiting the Brown County Art Gallery Foundation.

“I am completely honored to be the first living artist showcased,” Tim said. “I had a lot of fun with this project. I love nature and I hope this exhibit encourages people to celebrate the park with me.”

This masterwork was a lifetime in the making for Tim, who is now 68. Growing up in Indianapolis, Tim and his family visited Brown County and the state park often.

“I was about four years old the first time I saw the Brown County State Park vistas—and I was amazed by the views. Growing up in Indy, there was nothing like it,” Tim said.

Art was a passion from a young age for Tim.

“Our house was not close to other houses, so I didn’t have a lot of friends to play with. Instead, I would draw, and I got pretty good at it,” Tim said.

He also spent a lot of time playing the piano.

“I took my first piano lesson when I was 8 and instantly fell in love,” Tim said. “By the time I was 12, I was playing concertos with the Indianapolis Symphony.”

After high school, Tim studied piano at the Curtis Institute of Music in Philadelphia, and then graduate school at the University of Pennsylvania.

By the age of 40, Tim had achieved national recognition as a composer of contemporary orchestral and chamber music. He was a professor at the University of Pennsylvania and guest lecturer at Swarthmore College and Princeton University.

But the pull of art was still in the back of his mind. Tim and his wife Lisa also recognized that they were ready for a change in scenery.

“I started thinking, ‘If I’m ever going to give art a try, I better start now. You only get one life, you know,” Tim said. “When you are young, living in a big city is fun, but as I got older I realized that I needed some space. I was tired of the concrete society.”

The couple moved to their secluded Brown County home in 2001.

“It was exactly what we needed. It gave us such a calm, relaxed feeling,” Tim said. “And there was a lot going on in the arts.”

Unlike his music career, Tim taught himself everything he knows about art.

“I became particularly fascinated with Monet,” he said. “I would go to museums and study his brush strokes and then come home and research and teach myself.”

In 2019, after nearly 20 years of practice, Tim came up with an idea to showcase both his work and a local landmark.

“I had revisited Monet’s “series” paintings. Monet became fascinated with the idea of multiple paintings of a single subject under different effects of light (time of day, season, etc.),” Tim said. “Inspired by Monet’s experiments, I came up with the idea to paint the vistas of Brown County State park in different seasons and in different light.”

Over the next two years, Tim visited the park more than 100 times, studying, photographing, and sketching the park’s majestic landscapes.

“When I found a vista I liked, I would visit it several times to view it in different seasons and in different light,” Tim said. “I would then do a quick sketch for reference of what to include. I also took several pictures to help me recall specific structures in the hills and to help set the shadows, lighting, and colors. I quickly learned that studying how the light progressed and mental notes of the view were as important as my sketches and photos.”

Back at his home studio, Tim would combine the photographs and basic sketches into more refined sketches.

He would then work on anywhere from seven to 10 paintings at a time, giving the paint time to dry as he built the layers of each piece.

“Each painting has a variety of brushwork and texture,” he said. “I wanted to give each painting a rich, finished look to show more richness of detail.”

An average sized painting (20x24 inches) took five to seven settings of one to three hours each.

In all, the exhibit will include 85 paintings of the park, featuring 50 vistas, two lakes, three creeks, a few trails, a wildflower meadow, and various park elements.

All 85 paintings will be displayed together at the Brown County Art Gallery from October 2 to November 14.

“We hope people even new to art might find a painting with meaning to them,” Tim said.

In addition to Tim’s work, the gallery will also feature work by the early artists in a separate exhibit called “The Long View.” These paintings will feature similar vistas, painted by some of Brown County’s most historic artists.

During the opening weekend, there will be a private tour with the artist, a public barbeque with local musicians, and a town hall forum featuring Tim and former park naturalist Jim Eagleman.