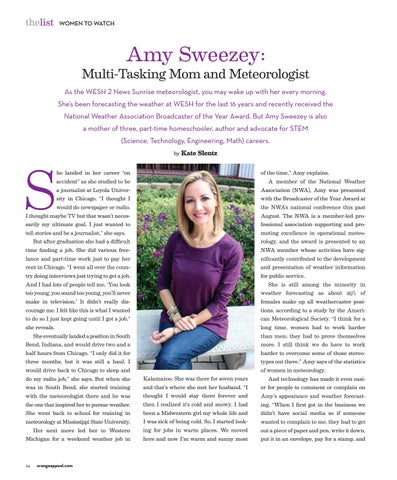 Multi-Tasking Mom and Meteorologist As the WESH 2 News Sunrise meteorologist, you may wake up with her every morning. She’s been forecasting the weather at WESH for the last 16 years and recently received the National Weather Association Broadcaster of the Year Award. But Amy Sweezey is also a mother of three, part-time homeschooler, author and advocate for STEM (Science, Technology, Engineering, Math) careers.

he landed in her career “on

of the time,” Amy explains.

accident” as she studied to be

A member of the National Weather

a journalist at Loyola Univer-

sity in Chicago. “I thought I

with the Broadcaster of the Year Award at

would do newspaper or radio.

the NWA’s national conference this past

I thought maybe TV but that wasn’t neces-

August. The NWA is a member-led pro-

sarily my ultimate goal. I just wanted to

tell stories and be a journalist,” she says.

But after graduation she had a difficult

rology, and the award is presented to an

time finding a job. She did various free-

NWA member whose activities have sig-

lance and part-time work just to pay her

nificantly contributed to the development

rent in Chicago. “I went all over the coun-

and presentation of weather information

try doing interviews just trying to get a job.

And I had lots of people tell me, ‘You look

She is still among the minority in

weather forecasting as about 29% of

females make up all weathercaster posi-

courage me. I felt like this is what I wanted

tions, according to a study by the Ameri-

to do so I just kept going until I got a job,”

can Meteorological Society. “I think for a

She eventually landed a position in South

than men; they had to prove themselves

Bend, Indiana, and would drive two and a

more. I still think we do have to work

half hours from Chicago. “I only did it for

harder to overcome some of those stereo-

three months, but it was still a haul. I

types out there,” Amy says of the statistics

would drive back to Chicago to sleep and

of women in meteorology.

do my radio job,” she says. But when she

Kalamazoo. She was there for seven years

And technology has made it even easi-

was in South Bend, she started training

and that’s where she met her husband. “I

with the meteorologist there and he was

thought I would stay there forever and

the one that inspired her to pursue weather.

then I realized it’s cold and snowy. I had

ing. “When I first got in the business we

She went back to school for training in

been a Midwestern girl my whole life and

didn’t have social media so if someone

I was sick of being cold. So, I started look-

wanted to complain to me, they had to get

Her next move led her to Western

ing for jobs in warm places. We moved

out a piece of paper and pen, write it down,

Michigan for a weekend weather job in

here and now I’m warm and sunny most

put it in an envelope, pay for a stamp, and

Women of the Year; Go Red for women's heart health; Weddings; Women to Watch; and much more!