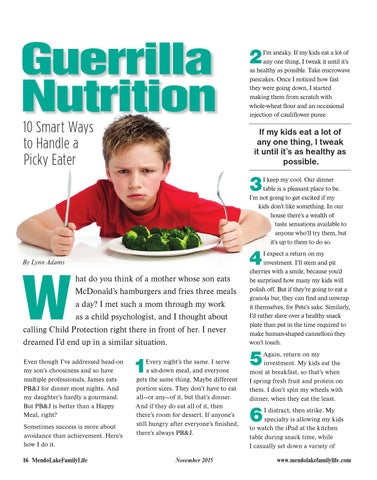 I’m sneaky. If my kids eat a lot of any one thing, I tweak it until it’s as healthy as possible. Take microwave pancakes. Once I noticed how fast they were going down, I started making them from scratch with whole-wheat flour and an occasional injection of cauliflower puree.

If my kids eat a lot of any one thing, I tweak it until it’s as healthy as possible.

I keep my cool. Our dinner table is a pleasant place to be. I’m not going to get excited if my kids don’t like something. In our house there’s a wealth of taste sensations available to anyone who’ll try them, but it’s up to them to do so.

hat do you think of a mother whose son eats McDonald’s hamburgers and fries three meals a day? I met such a mom through my work as a child psychologist, and I thought about calling Child Protection right there in front of her. I never dreamed I’d end up in a similar situation. Even though I’ve addressed head-on my son’s choosiness and so have multiple professionals, James eats PB&amp;J for dinner most nights. And my daughter’s hardly a gourmand. But PB&amp;J is better than a Happy Meal, right? Sometimes success is more about avoidance than achievement. Here’s how I do it.

Every night’s the same. I serve a sit-down meal, and everyone gets the same thing. Maybe different portion sizes. They don’t have to eat all—or any—of it, but that’s dinner. And if they do eat all of it, then there’s room for dessert. If anyone’s still hungry after everyone’s finished, there’s always PB&amp;J.

I expect a return on my investment. I’ll stem and pit cherries with a smile, because you’d be surprised how many my kids will polish off. But if they’re going to eat a granola bar, they can find and unwrap it themselves, for Pete’s sake. Similarly, I’d rather slave over a healthy snack plate than put in the time required to make human-shaped cannelloni they won’t touch.

Again, return on my investment. My kids eat the most at breakfast, so that’s when I spring fresh fruit and protein on them. I don’t spin my wheels with dinner, when they eat the least.

I distract, then strike. My specialty is allowing my kids to watch the iPad at the kitchen table during snack time, while I casually set down a variety of