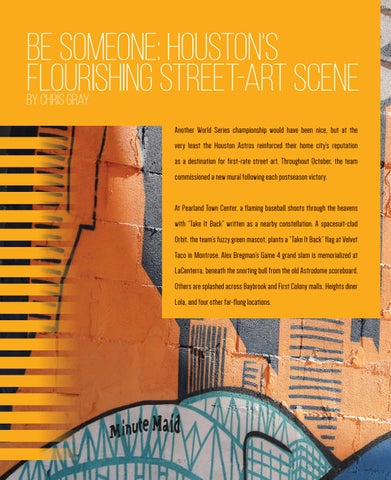 Be Someone: Houston’s flourishing street-art scene

Another World Series championship would have been nice, but at the very least the Houston Astros reinforced their home city’s reputation as a destination for first-rate street art. Throughout October, the team commissioned a new mural following each postseason victory.

At Pearland Town Center, a flaming baseball shoots through the heavens with “Take It Back” written as a nearby constellation. A spacesuit-clad Orbit, the team’s fuzzy green mascot, plants a “Take It Back” flag at Velvet Taco in Montrose. Alex Bregman’s Game 4 grand slam is memorialized at LaCenterra, beneath the snorting bull from the old Astrodome scoreboard. Others are splashed across Baybrook and First Colony malls, Heights diner Lola, and four other far-flung locations.

In light of the seriesâ&#x20AC;&#x2122; outcome, how long these murals will remain up is an open question. Not in doubt is the high esteem in which Houstonians hold public art, nor the stunning creativity, wry humor, and civic pride with which its artists express themselves.

Visit Houston, the city’s official tourism bureau, features an entire page of murals on its website, including the famous “Houston is Inspired” rainbow near Market Square and Daniel Anguilu’s postcard-style “Greetings From Houston” on now-closed Heights gelato shop Gelazzi.

Minute Maid Park is as good a place as any to start a Houston mural tour anyway. Donkeeboy, the graffiti name of local artist Alex Roman, has created several pieces for the stadium’s Hall of Fame Alley in left-center field. (The spaceman-Orbit at Velvet Taco is his, too.) To name just a couple more, his work also adorns F.M. Kitchen + Bar on N. Shepherd and a Shipley Donuts on the far North Freeway showcases a moonscape where the landing craft’s tires have been replaced by the sugary pastries.

Must run in the family: Donkeeboy’s mother, who of course goes by “Donkeemom,” is an artist in her own right who helps her son create his murals and creates her own, too. To commemorate this summer’s 50th anniversary of the Apollo 11 moon landing, she painted a pink astronaut on the side of 8th Wonder Brewery. Her flag bore this quote from Frida Kahlo: “I’m the type of woman that if I want the moon, I’ll get it down myself.”

The ballpark is also convenient to the East End, one of Houston’s most mural-heavy patches of real estate. Dozens of murals are scattered across the old Second Ward, including a properly spooky mojo woman beckoning imbibers to Milby Street “daiquiri dive” Voodoo Queen, and Mercedes Fernandez’s “Ventanas de Oportunidad” behind the original Ninfa’s restaurant on Navigation Boulevard. Originally completed in 1973, one of the most historically significant murals is Leo Tanguma’s “The Rebirth of Our Nationality”. In early 2018, with the septuagenarian Tanguma acting as a consultant, the 120-foot Canal Street panorama of Mexican-American life was restored by Mario Figueroa, Jr. As GONZO247, Figueroa and his company Aerosol Warfare have dominated H-Town street art for more than a quarter-century — “Houston is Inspired” is his, as is the new Pearland Town Center “Take It Back” mural, and a piece at the University of St. Thomas dedicated this past March.

GONZO247’s gorilla mural, commissioned by the Houston Zoo a few years back, sits across the street from the Continental Club and a few blocks away from two more prominent Midtown scenes: Sebastien “Mr. D” Boileau’s “Preservons la Creation,” in which an enormous figure of God — at 8,000 square feet, it’s thought to be Houston’s largest mural — is holding two spray-paint cans, and the inspiring walls of the Breakfast Klub, which lately have paid tribute to Michelle Obama and a panoply of Houston sports greats.

Like many of his colleagues, GONZO247’s creations are dominated by images of the Downtown skyline, the space program, and totems of Houston’s rap scene like DJ Screw and the low-riding luxury sedans known as “SLABs.” All of those things — and the Astros, of course — can usually be found at the so-called Houston Graffiti Park, the vacant building that was once the Meridian nightclub but is now Ground Zero for Houston’s street-art scene, including the annual HUE Mural Festival. This year’s edition ran November 18-24.

There, recent murals of Gulf Coast rap heroes UGK and fallen Tejano icon Selena strike a solemn musical note similar to Stevie Ray Vaughan at Rockin’ Robin near Cactus Music; while over at Numbers rests Rene Fernandez’s gothy homage to such alt-rock luminaries as David Bowie, Blondie’s Debbie Harry, and Morrissey. Super Happy Fun Land’s moon-faced mural is worth a look, as is the cassette by “Sode” (or @soder_texas) on the door of Southside institution Screwed Up Records & Tapes. And who could forget Houston’s single most famous piece of street art — the “Be Someone” graffiti on an I-45 railroad bridge near Downtown? Often defaced but always replaced, it’s become such a part of the local landscape, it’s even been incorporated into the Houston Museum of Natural Science’s annual “Trains Over Texas” holiday exhibition. Perhaps no one, you might say, has taken that charge more to heart than the city’s muralists. 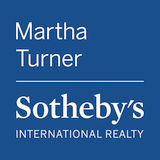