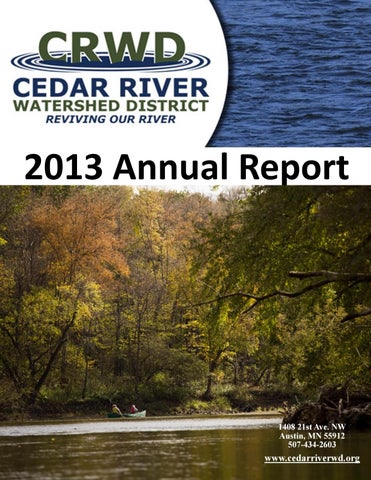 Cedar River Watershed District Submitted Several Grant Applications for State Clean Water Legacy Funding Applications were submitted in 2013 for the Dobbins Creek Watershed and a few areas south of Austin on the Cedar. Unfortunately, our requests were not funded, but we continue to look for other avenues for funding. One application for funding submitted was for the Dobbins Creek Watershed, which is the stream that flows into Eastside Lake. This water detention project would reduce river flows during rain events by 8 percent at its confluence with the Cedar River in Austinâ&amp;#x20AC;&amp;#x2122;s Driesner Park. The work would also keep about 120 tons of soil per year from being eroded into Dobbins Creek, East Side Lake (a stretch of Dobbins) and the Cedar River.

The second application that we submitted is on a group of ravines south of Austin. These areas are very vulnerable for erosion and are a direct line to the river. We hope to stabilize the area and retain some of the water for a slow release. The CRWD board is hopeful to receive outside funding for these projects and then be able to not only make a difference in the watershed, but minimize the levy for the residents.

CRWD Board of Managers

It is the Cedar River Watershed Districtâ&amp;#x20AC;&amp;#x2122;s purpose to reduce flooding and protect and improve water quality in the streams.

Penkava/Ault Restoration Project In 2013, the CRWD secured a flowage easement that will allow a full scale wetland restoration project, spanning nearly 80 acres of wetland and 2 landowners. The project is cooperative between the Cedar River Watershed District and the Mower Soil &amp; Water Conservation District. The project leverages State and Federal funds to pay for 75% of the costs. Phase I was completed in 2013 on the Penkava/Ault restoration project. This part of the project involved tile breaks and tile re-route. Subsurface water was outlet into the wetland and then stabilized for denitrification benefits and additional wetland water.

Phase II will involve a series of water control structures and earth work, which will provide permanent flood damage reduction and water quality benefits. Construction will begin on Phase II in 2014.

CRWD Completes its First Flood-Control Project Cedar River Watershed District completed its first major flood-control project in late 2013 as part of an effort to hold back stormwater in a ravine near Lansing. CRWD has constructed several water-quality projects through the use of state Clean Water Legacy funding, but its construction on the Ken Trom property along the Cedar River in Lansing Township was its first impoundment project that focused on flood-damage reduction.

With this project, an estimated 4.4 tons of sediment and 18 pounds of phosphorus will be prevented from entering the Cedar River every year. “The CRWD board and staff are really excited to get this first flood-control project completed,” Hanson said. “This should be a great jumping off point for future, similar projects in the Cedar River Watershed.” The project utilized natural land topography to create a system that will dam up water during a rain event and hold it there in a ravine on the Trom property. The impoundment slows stormwater flows to the Cedar River and provides a holding area for any upstream runoff.

â&amp;#x20AC;&amp;#x153;Cedar 220â&amp;#x20AC;? photo project The Cedar River Watershed District and Vision 2020 Waterways Committee sought photos showing people fishing, boating, kayaking, canoeing, removing litter from or walking/posing along the Cedar River or other local waterways, including East Side Lake. This project aimed to get at least 220 individuals pictured in an effort to promote recreation on the Cedar River and other local waterways as well as efforts to remove litter from them.

River Night for Families Hosted by CRWD Children, along with their father or grandpa, fished along the banks of the Cedar River and paddled below the Ramsey Dam in September as part of a “Dad, Grandpa &amp; Me” class. About 20 people participated, including many young children. Cedar River Watershed District proposed the special evening at Ramsey Dam for the class that is offered at different times of the year by Austin Public Schools’ Community Education program. CRWD coordinated the education and recreation aspects of the event, including providing a canoe and kayaks. Based on the night’s great success, CRWD staff is looking forward to offering similar events for families in the future.

Over 700 Tires Removed from the Cedar River Since 2011 CRWD-led efforts have removed more than 700 tires from the Cedar River since 2011 when the Watershed District launched an Adopt-A-River initiative in Mower County. Volunteers who adopted stretches of the Cedar River under the CRWD program have removed a majority of the tires. In fall 2013, however, the Conservation Corps of Minnesota &amp; Iowa removed about 220 tires from the Cedar River south of Austin as part of a partnership with the CRWD, which has covered the cost of disposing all removed tires. Adopt-A-River volunteers had notified the CRWD about a stretch of the waterway that had a high number of tires. Conservation Corps of Minnesota &amp; Iowa provides meaningful work for young people in managing natural resources, responding to disasters, conserving energy and leading volunteers. Additionally, through its work for the CRWD, Conservation Corps members removed about 14,000 pounds of trash from a dump site north of the village of Lansing along the Cedar River. A four-person crew also worked to open a stretch of the Cedar River between the Ramsey Dam and Wildwood Park (near the Interstate 90 bridge) for canoeists and kayakers. Some areas had been blocked by fallen trees and debris.

• • • To view the full report, and reports from the past, go to the following link: http://www.cedarriverwd.org/ projects/surface_water_monitoring.html

Multiple snowmelts occurred in the spring, followed by several rainfalls that kept the soil saturated throughout early summer. The summer and fall were very dry. Total precipitation was 0.9 inches above the normal average precipitation for this area of 31.1 inches. The Mower County average rainfall was over 25 inches by the end of June! TSS concentrations ranged from &lt;2 mg/L to 318 mg/L compared to the state guideline of 60 mg/L. Rose Creek had the highest Turbidity and TSS levels due to heavy rains in the watershed. Dobbins Creek had the highest E. coli concentrations. Nitrate levels were very high in 2013 due to 2011 and 2012 being very dry and building up residual nitrate levels in the soil. Our wet spring flushed out the nitrates.

Rock Inlets Replace Traditional Tile Inlets ROCK INLETS CAN: • Reduce sediment and nutrient loss • Increase drainage capacity and outlet • Stand up to minor tillage and are easy to farm around

Money is available to cover up to 100% of the costs of Rock Inlet installation on your farm.