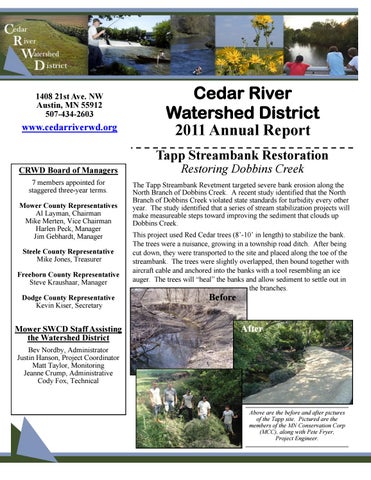 This project used Red Cedar trees (8’-10’ in length) to stabilize the bank. The trees were a nuisance, growing in a township road ditch. After being cut down, they were transported to the site and placed along the toe of the streambank. The trees were slightly overlapped, then bound together with aircraft cable and anchored into the banks with a tool resembling an ice auger. The trees will “heal” the banks and allow sediment to settle out in the branches.

Above are the before and after pictures of the Tapp site. Pictured are the members of the MN Conservation Corp (MCC), along with Pete Fryer, Project Engineer.

CRWD Has Changes in Board New Managers...Welcome to the Board! Mike Merten - Mower County Representative

Austin area farmer Mike Merten was appointed to the CRWD Board of Managers to fill the vacant position left after Dan Regner retired from the board.

Rural landowner Kevin Kiser was appointed by the Dodge County Board to fill the vacant position left after Richard Fuller retired from the board.

Mike has been an effective leader on numerous local boards and has a unique perspective in that he lives within the city limits, but also farms. Mike takes his position on the board seriously. His communication skills and problem solving ability will be an asset to the board.

Kevin manages the Freeborn Coop and brings to the board his excellent management skills. Public awareness and education on the activities of the watershed district are important to him. With the Cedar Riverâ&amp;#x20AC;&amp;#x2122;s headwaters in Dodge County, he sees opportunity for projects in the area.

It is the Cedar River Watershed Districtâ&amp;#x20AC;&amp;#x2122;s purpose to reduce flooding and protect and improve water quality in the streams.

CRWD Passes New Rules After nearly two years of work, the CRWD Board of Managers passed new rules and a permitting program directed at reducing future flooding and improving water quality. CRWD staff are administering the rules and permitting program, which both went into effect December 1st. CRWD’s new rules cover areas related to stormwater, flood plains, water body alterations, erosion control and enforcement. All watershed districts are required by state law to implement rules to accomplish their purpose. The CRWD’s rules are intended to fill gaps in existing federal, state and local regulations – not duplicate existing regulations. Copies of the rules are available at the Mower Soil &amp; Water Conservation District office at 1408 21st Ave NW in Austin and online at the CRWD’s website – www.cedarriverwd.org. Brochures with a summary of the CRWD rules also are available at the SWCD office.

Adopt-A-River - Ce Adopt-A-River effort starts on Cedar Thousands of pounds of trash are no longer in the waters of the Cedar River or along its banks following a highly successful first year of a local Adopt-A-River effort. Initiated and led by the CRWD, the Adopt-A-River effort in Mower County involved nine groups â&amp;#x20AC;&amp;#x153;adoptingâ&amp;#x20AC;? stretches of the Cedar River for cleaning at least once a year. Eight of those groups conducted cleanups in 2011, involving about 50 volunteers overall. Tires proved to be a major issue with the Cedar River, with one cleanup group removing 120 tires and another spotting 110 tires in a different short stretch of the river. The CRWD received help for the Adopt-A-River program from the Jay C. Hormel Nature Center, City of Austin, Mower County and the Minnesota Department of Natural Resources.

CRWD staff is seeking more groups to adopt available cleanup routes on the Cedar River for 2012 as well as the watershed districtâ&amp;#x20AC;&amp;#x2122;s other tributaries. If interested, please contact the CRWD at 507-434-2603 or stop by the Mower Soil &amp; Water Conservation District office at 1408 21st Ave NW in Austin.

Corn Stalk Nitrate Testing In 2011, our staff sampled 10 fields in the Cedar River Watershed for the Corn Stalk Nitrate Testing Program. The ag producers found that the areas which were tested had the highest nitrate numbers in the Midwest. This is likely due to the prolonged drought. In its first real year of results, the testing opened the producersâ&amp;#x20AC;&amp;#x2122; eyes to the concern and some will likely make adjustments. Overall, this program helps the watershed and the producer.

Rain Barrel Sales CRWD staff along with other local agencies distributed 300 rain barrels in June of 2011 in Austin as part of a new effort to promote water conservation as well as improve water quality. Sold at discounted rates, the rain barrels are an efficient, convenient way to trap runoff from a roof and storing it in a 55-gallon barrel for later use around your yard. Each barrel has a spigot at the bottom. CRWD officials and their partners hope to offer a similar rain barrel program again. Sponsors of the event included: Mower Soil &amp; Water Conservation District; Austin Utilities; Izaak Walton League; and the Austin A.C.E.S. group.

Streamwater Monitoring In 2011, staff collected 14 samples at 10 different sites in the Cedar River Watershed. Dissolved oxygen provides fish and other aquatic critters with air to breath. The goal is to have dissolved oxygen levels stay above 5mg/L. The averages in general were higher this year and only dropped below the threshold of 5 mg/L about 1% of the time. Nitrogen is a basic plant nutrient that in excess is responsible for the hypoxia zone in the Gulf of Mexico and blue baby syndrome in drinking water. In the previous three years, Nitrate-Nitrite levels exceeded 10 mg/L in about 20 percent of the samples, this year was 45 percent. In five of the eight sites where monitoring was done in the past four years, the 2011 average was the highest for N-N.

Phosphorous is a basic plant nutrient that in excess can cause excessive plant growth. Phosphorous averages showed a reduction from previous years. Rose Creek was the exception, with a large increase this year. This might correlate with the increase in total Water sampling in the Cedar suspended solids that was seen at this site. When compared to the past monitoring River Watershed averages, two of the eight sites showed the highest average and one of the eight sites had its lowest sample year. About 27 percent of the samples were above the .200 mg/L standard, up from 23 percent last year. Total Suspended Solids (TSS) is a measurement of the sediment being transported in the stream. Overall 10 percent of TSS samples exceeded 60 mg/L. Compared to past monitoring efforts, four of the eight sites had the highest average. We had a wetter spring and that showed with high TSS this spring. Rose Creek had the highest average and in the past, it was typically one of the lowest.

Wetland Restorations in the Watershed Ordella RolfsonThe Rolfson wetland restoration was the kick-off for the CRWD initiative to reduce flows in Dobbins Creek Watershed. The project was enrolled through the RIM Program and developed to tackle the high-velocity flow challenges of the Dobbins landscape. Located on the top of the watershed, the Rolfson project is the first stop in the water treatment process down to the Cedar. The project reduces flow rates by over 40% on 100 year rain events. Roger PetersonThe Roger Peterson Restoration project utilized several different state and federal conservation programs. The project started as a cooperative restoration between neighbors. Eventually, Mr. Peterson purchased the property. The restoration is small and located on the bottom of a small, 20 acre watershed. The reduction numbers are not significant. However, the location is positive for holding water, which previously drained directly into a private drainage ditch, one mile from the Cedar River. Steve TorgersonTorgerson was an efficient stormwater treatment project. The easement involved the minimal amount of acres to get the maximum amount of basin storage. The project was funded through state and federal restoration program funds. This project was very unique in topography. There were a series of three basins that filter the water before out-letting into Mower County Ditch #26. CD #26 enters the Cedar River in the city of Mapleview. The landowner participated because of the wildlife that will be attracted by the shallow wetlands. In addition, the project basins and design will provide perpetual storm water treatment and flow reduction.

City Incorporates BMP’s for Snow Piles City of Austin leaders worked with the CRWD to install “best management practices,” also known as BMPs, around the city’s large snow pile site next to the Cedar River. Focused on improving water quality, the practices implemented will help keep pollutants from entering the Cedar River as the snow pile melts. CRWD and City of Austin officials worked together to find a solution for the city’s snow storage before the CRWD’s new rules went into effect in early December 2011.