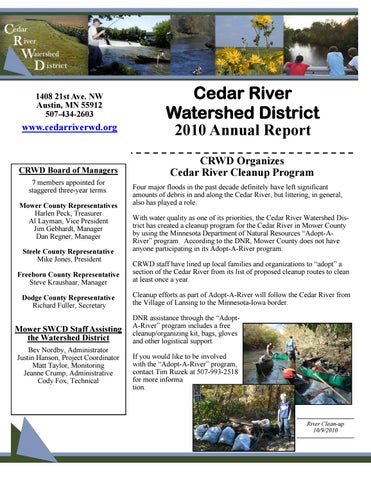 CRWD Organizes Cedar River Cleanup Program Four major floods in the past decade definitely have left significant amounts of debris in and along the Cedar River, but littering, in general, also has played a role. With water quality as one of its priorities, the Cedar River Watershed District has created a cleanup program for the Cedar River in Mower County by using the Minnesota Department of Natural Resources “Adopt-ARiver” program. According to the DNR, Mower County does not have anyone participating in its Adopt-A-River program.

CRWD staff have lined up local families and organizations to “adopt” a section of the Cedar River from its list of proposed cleanup routes to clean at least once a year.

Cleanup efforts as part of Adopt-A-River will follow the Cedar River from the Village of Lansing to the Minnesota-Iowa border.

DNR assistance through the “AdoptA-River” program includes a free cleanup/organizing kit, bags, gloves and other logistical support. If you would like to be involved with the “Adopt-A-River” program, contact Tim Ruzek at 507-993-2518 for more informa tion.

U.S. nonprofit ranks Cedar fifth most-endangered river American Rivers, a Washington-based nonprofit organization, ranked the Cedar River as the fifth most-endangered river in the United States in 2010. The organization’s annual top 10 list of America’s “most endangered” rivers focused only on the Cedar River’s issues in Iowa, due to outdated flood management and poor watershed planning there where it also provides drinking water to more than 120,000 residents. Totaling about 300 miles overall in length, the Cedar River starts in neighboring Dodge County before flowing through Mower County and the City of Austin. It then connects to the Iowa River in southeast Iowa before emptying into the Mississippi River.

CRWD resource specialist honored with state award CRWD resource specialist Justin Hanson was honored as the 2010 Outstanding Watershed District Employee by the Minnesota Association of Watershed Districts. The award honored Hanson, who also serves as administrator for the Turtle Creek Watershed District (part of the Cedar River Basin) for his work in Mower and Freeborn counties to reduce flooding, improve water quality and create more wildlife habitat. Chris Hughes, board conservationist for Minnesota’s Board of Water and Soil Resources, nominated Hanson for the award, saying he has “great passion for conservation and skills to transform that passion into action.”

Government officials at the township, city and county levels in Dodge, Freeborn, Mower and Steele counties reviewed the CRWD’s draft rules submitted, following months of work by a Rules Advisory Committee of citizens from various sectors. It began a process involving public meetings before eventually going to the CRWD board of managers for a final hearing and approval. All watershed districts in Minnesota are required to have a watershed management plan and rules in place under state law. The CRWD’s rules were drafted to address the watershed’s top priorities of reducing stormwater flows as well as protecting and improving water quality. The proposed rules cover several areas, including stormwater, flood plain, water body alterations, erosion control and enforcement.

The CRWD partnered with the Mower Soil &amp; Water Conservation District to get $335,000 in federal grants for 2011 work. MRBI work locally is focused on a small priority subwatershed north of Austin and will include cost-sharing conservation projects as well as wetland restoration. Total project costs in the CRWD programâ&amp;#x20AC;&amp;#x2122;s five-year period is a little more than $2.6 million, with $1.7 million of that coming from the USDA. The program started in July.

Water Quality Water quality data was collected through the Total Maximum Daily Load (TMDL), Clean Water Legacy Stream Water Assessment Grant (CWL SWAG), and the Cedar River Watershed District (CRWD) Samples were taken from late March to October. The TMDL sampled 12 times on 6 sites, 2010 was the last year of monitoring. The CWL SWAG and CRWD monitoring programs sampled 13 times on 11 sites. 2010 was the last year the CWL SWAG monitoring. The TMDL and CWL sites had continuous stage samplers and staff gages installed. Samples for conductivity, dissolved oxygen, pH, temperature, and turbidity were taken with a handheld YSI at all sites. Ttubes were also used at all sites to monitor water quality. TMDL lab samples were taken to the Minnesota Department of Health for TSS, VSS, nitrate-nitrite, lab pH, lab turbidity, TP and OP. CWL samples were sent to Minnesota Valley Testing Labs (MVTL) and sampled for TSS, E.coli, sulfate, chloride, nitrate-nitrite, ammonia, TP, OP and TKN. Water quality results are processed and reviewed. The data is sent to MPCA and inserted into the STORET program. All water quality data is available on the web at www.pca.state.mn.us/data/edaWater/index.cfm. MPCA used the data to assess the streams for impairment or to remove from the impairment list. Stream impairment listings by MPCA occur every 2 years. A full and condensed version of monitoring report will be available at the Cedar River Watershed District website (www.cedarriverwd.org). The following graphs show the water quality results. The red line on the graphs is a standard and the yellow line is the normal sample average. The nitrate-nitrite samples graphed are the higher end of the sample set. Nitrate-nitrite samples tend to peak when streams return to normal flow after an increase flow event. Phosphorous levels were the highest below the two wastewater treatment plants and during low flows. The graph looks like an opposite of the nitrate-nitrate graph. The turbidity graph again shows the higher samples. The total sample set exceeded the MPCA standard about 10 percent of the time. These graphs follow the peak flows of the streams.

Geomorphology Bill Thompson (MPCA) and Matt Taylor worked to collect the geomorphology data on most of the streams and tributaries to the Cedar River. The DNR collected cross-sectional data in the Cedar River and comparing it to historical data. The collection process involves measurements, a physical survey, and a sediment survey. This will provide a better understanding of channel types, future channel types and sedimentation. It will also provide a better understanding as to where future practices may provide the best protection. They have determined that most of the streams in the watershed are labeled as “type F” or meandering, entrenched, and highly incised systems in low gradient landforms. In these systems, top-of-bank elevation is much higher than bank-full elevation detaching the stream from the flood plain.

Hydrology Model for Entire Watershed Started In order to make a difference in the watershed, the CRWD needs to fully understand the flows throughout the entire watershed and where to focus our dollars to have the most impact. The essential tool to understanding the flows is a detailed hydraulic and hydrology model (H&amp;H model) of the entire watershed including, the Turtle Creek Watershed District (TCWD), as Turtle Creek drains into the Cedar River just upstream of Austin. CRWD is proposing to develop a detailed H&amp;H model for all of the Cedar River watershed in Minnesota. The detailed H &amp; H model will provide an effective, efficient, and essential tool that the CRWD &amp; TCWD need to: • • • • • • •

Understand flows throughout the watershed Plan for, site and design flood control and water quality improvement measures Analyze potential impacts of proposed developments and other land-altering practices on the current drainage system. Determine mitigation measures needed to ensure flood problems are not worsened as a result of development Establish the 100 year floodplain that will be under the jurisdiction of the CRWD and TCWD rules Provide essential design information to townships, counties and smaller cities in the CRWD who are not in a position to perform comprehensive analyses because of cost constraints and/or the size of tributary watershed. Avoid the problems associated with taking a piece-meal approach to drainage system modifications; a piece meal approach can result in future problems, because all potential impacted areas are not analyzed and clearly understood.

The timeframe to complete this model is: •

Clean Water Legacy funds OK’d for CRWD projects Significant state funding was approved for the CRWD in 2011 for projects along Dobbins Creek northeast of Austin, mainly to improve water quality. State officials granted the CRWD’s full request of $163,596 in Clean Water Legacy funding to do three projects in 2011 that will start the CRWD’s implementation of its Dobbins Creek Ag Watershed Restoration plan. Two streambank restorations and a stormwater retention site in the north branch of Dobbins Creek are the first planned projects. A 2008 study identified Dobbins’ north branch as a target area for reducing flooding and improving water quality.