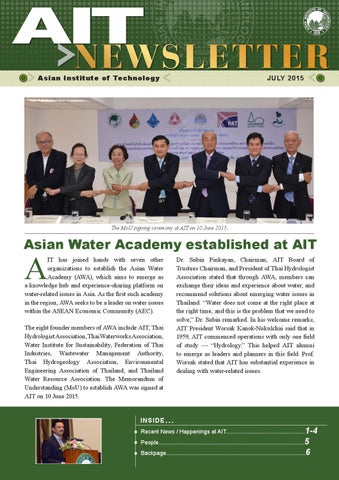 IT has joined hands with seven other organizations to establish the Asian Water Academy (AWA), which aims to emerge as a knowledge hub and experience-sharing platform on water-related issues in Asia. As the first such academy in the region, AWA seeks to be a leader on water issues within the ASEAN Economic Community (AEC). The eight founder members of AWA include AIT, Thai Hydrologist Association, Thai Waterworks Association, Water Institute for Sustainability, Federation of Thai Industries, Wastewater Management Authority, Thai Hydrogeology Association, Environmental Engineering Association of Thailand, and Thailand Water Resource Association. The Memorandum of Understanding (MoU) to establish AWA was signed at AIT on 10 June 2015.

Dr. Subin Pinkayan, Chairman, AIT Board of Trustees Chairman, and President of Thai Hydrologist Association stated that through AWA, members can exchange their ideas and experience about water, and recommend solutions about emerging water issues in Thailand. “Water does not come at the right place at the right time, and this is the problem that we need to solve,” Dr. Subin remarked. In his welcome remarks, AIT President Worsak Kanok-Nukulchai said that in 1959, AIT commenced operations with only one field of study — “Hydrology.” This helped AIT alumni to emerge as leaders and planners in this field. Prof. Worsak stated that AIT has substantial experience in dealing with water-related issues.

Hungarian Ambassador pays maiden visit to AIT Ambassador of Hungary to Thailand, H.E. Dr. Peter Jakab paid a maiden visit to the Asian Institute of Technology (AIT) on 23 June 2015, and offered to connect Hungarian institutions of higher education and research with AIT. Stating that he was “very impressed” by AIT and its achievements, the Ambassador remarked that it was important that AIT and Thailand engage with Hungary. He said that the World Science Forum, which is organized biannually in Hungary, is a forum where the two could cooperate. Stating that relations between Prof. Worsak Kanok-Nukulchai (left) with H.E. Thailand and Hungary date back to the nineteenth century, Dr. Peter Jakab. Ambassador Jakab added that ties between the two cover the fields of agriculture, music, finance and technology. He also elaborated on a new scholarship program for international students that had been initiated by the Hungarian government.

Japan’s Ministry of Environment partners with AIT for RR.CAP AIT on 9 June 2015 renewed its partnership with Japan by signing a Memorandum of Agreement (MOA) with H.E. Hideka Morimoto, Deputy Vice Minister, Ministry of the Environment of Japan (MOEJ). Through the agreement, MOEJ will second one of its top professional executives to serve as the Director of AIT’s Regional Resource Centre for Asia and the Pacific (RRC.AP) for a term of three years. In addition, MOEJ will fund more than US$ 1.2 million worth of projects in 2015, including capacity building activities under the Asia-Pacific Adaptation Network (APAN), of which RRC.AP has been a core technical partner since its inception. Other partners of APAN include the Institute for Global Environmental Studies

A New Milestone – All AIT Degrees are Officially Recognized in India The Asian Institute of Technology crossed another historic milestone when its degrees were officially recognized by India as a result of AIT being granted Associate Membership of the Association of Indian Universities (AIU), the apex coordinating body for all universities in India. The Governing Council of AIU authorized AIT membership at its meeting on 22 May 2015. As the representative body for all universities of India, the AIU plays the important role of evaluating foreign degrees and granting recognition. AIT’s graduates will now be treated with equivalence to all graduates from Indian universities.

AIT will also be invited to participate in the annual vice chancellors’ conference or even to play host to the meeting at its campus in Thailand. “This means all AIT graduates are to be treated at par with graduates from prestigious Indian universities like Indian Institutes of Technology,” said AIT’s Prof. Nitin Tripathi, who liaised with the AIU and made the case for AIT’s acceptance..

Prof. Ganesh Shivakoti with his book.

Says Prof. Shivakoti, “This book examines prototype design guidelines for collaborative forest governance through an evaluation process at the level of its enforcement mechanism.” It takes a fresh look at the issue of cross-scale interactions and multi-level governance by unfettered and trustworthy outsiders, he says, adding that the publication reveals how foreign, domestic and local ‘outsiders’ can be involved effectively in the activities of forest use and management. Such involvement and activities are expected to provide a breakthrough in solving these problem, Prof. Shivakoti adds.

Published by ADB, the book is coauthored by Prof. Ram M. Shrestha with Mr. Jiwan S. Acharya, Senior Climate Change Specialist, Clean Energy, ADB. The publication focuses on Sustainable Energy Access Planning (SEAP), which is aimed at “developing a socially inclusive energy supply system that gives both the poor and the nonpoor sustainable access to at least the minimum amount of energy for their basic needs.” This type of planning is also done to identify environmentally sound and climatefriendly technologies and resource options for providing energy access, and the associated investment opportunities, Prof. Ram Shrestha revealed.

The deal signed on 3 June 2015 between AIT President Prof. Worsak Kanok-Nukulchai and TEAM Group Chief Executive Officer, International Sector, Mr. Chawalit Chantararat – as part of a ‘Technical Exchange Seminar 2015’ co-organized by AIT Consulting and TEAM Group – will foster cooperation over the next five years. Under the MoU, AIT students will now have a chance to intern at the leading conglomerate of Thaibased consulting firms, during the summer months of June and July.

AIT is among the 10 educational institutes which will benefit from Microsoft’s “Student Advantage” scheme that allows students free usage of the Office 365 ProPlus package. The scheme was announced by the Microsoft (Thailand) Anthony Edwin Guirnela (left) with Haresh Khoobchandani. Managing Director, Haresh Khoobchandani at an event organized in Bangkok.

30 Afghan student arrive under ADB program Thirty engineers hailing from the Western Basins regions of Afghanistan have arrived at AIT under an ADB program funded by the Canadian Department of Foreign Affairs, Trade and Development (DFATD). The group, which includes six women began their bridging program at AIT’s Language Center as a preparatory course prior to beginning their Master’s Program. Eighteen of these students will enrol in Water Engineering and Management (WEM), nine in Agricultural Systems and Engineering (ASE), and one each in Mechatronics, Computer Science and School of Management. This capacity building project, which falls under the aegis of the Ministry of Energy and Water (MEW), Government of Afghanistan is worth nearly $1.57 million.

to members for prominent contributions to society. Prof. Yamamto twice served as President of the Japan Society of Material Cycle and Waste Management. Following many years of service, Prof. Yamamoto retired last year as a Managing Board member.

Anh Nguyet is an alumna of ITC, University of Twente, The Netherlands. After completing her Master’s in Geo Information Science and Earth Observation in 2012, she has been working at AIT conducting research on interaction of land-use change, socio-economics and the ecosystem, with Prof. Nguyen Thi Kim Oanh.

degree is in Political Science from the Lady Shri Ram College, Delhi University (India). She has an M.A. in Social Work from the Tata Institute of Social Sciences, Mumbai (India) as well as a M.A. in Communication Management from USC Annenberg.

Prof. Mohamed Mujithaba Mohamed Najim, an AIT alumnus has been appointed as Vice Chancellor of South Eastern University of Sri Lanka. Prior to his appointment, Prof. Najim was serving as a Professor in Environmental Conservation and Management at the Department of Zoology and Environmental Management in the Faculty of Science at the University of Kelaniya, Sri Lanka. Prof. Najim obtained his Master’s in Irrigation Engineering and Management from AIT’s School of Civil Engineering in 2000.

AIT reaches out to Nepal’s communication needs While Nepal was grappling with the immediate aftermath of the earthquake, students from the AIT were among the first to reach and provide emergency communication services. As a part of the team of Télécoms Sans Frontière (TSF), AIT students rushed to Nepal on 28 April 2015, and immediately began conducting a needs assessment before launching emergency operations. Two AIT Master’s students -- Serena Amatya of Disaster Preparedness Mitigation and Management (DPMM) program and Niraj Bhujel of Information and Communication Technologies (ICT) focussed on TSF operations, while another DPMM Doctoral student student, Md. Shahabuddin conducted field work on critical infrastructure. DPMM also organized a “Learning through Drawing” art lesson for children of the AIT community, and a seminar on “Lessons learnt from the Nepal Earthquake” on 25 June 2015. AIT alumnus and Director

of Strategic Cooperation at ICIMOD, Mr. Basanta Shrestha delivered a talk on “Nepal Earthquake 2015: Information Debris – Making Sense of it All” on 29 June 2015.