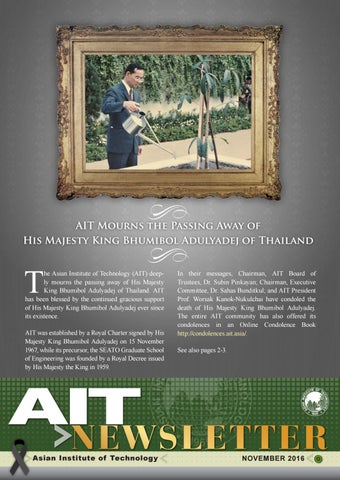 AIT has been blessed with a Royal association with His Majesty King Bhumibol Adulyadej. His Majesty presided over AIT convocations (1968, 1975), and the opening of AIT campus in Pathum Thani (1973). His Majesty graciously accepted AITâ&#x20AC;&#x2122;s first Gold Medal for Outstanding Leadership in Rural Development (1987), Doctorate in Engineering, and Doctorate in Science (Honoris Causa) in 1975 and 2001 respectively. NOVEMBER 2016

AIT’s Dr. Thammarat Koottatep has been appointed Member of Board of Trustees of the International Foundation of Science (IFS). IFS is a Stockholm-based research council that provides opportunities for young scientists to conduct research on biological and water resources in low income countries. Dr. Thammarat is among the two trustees from Asia, and the lone member from Southeast Asia. His appointment, which was announced by IFS Director, Dr. Nighisty Ghezae, follows the recommendation of the nomination and members committee of IFS. He has been appointed for a period of three years (20162019). Dr. Thammarat has worked with IFS earlier, when he was a grant recipients of a project on “Effectiveness of Phnom Penh’s Wetlands in Reducing Contaminant Loads to the Mekong/Bassac River system.”

Inaugural Advisory Board meeting deliberates on AIT’s vision and mission The inaugural meeting of the newly constituted AIT Institute-Level Advisory Board (ILAB), which met on 21 October 2016, deliberated on the vision and mission of the Institute, and discussed ways to position AIT in the years to come. Chairing the meeting, Prof. William C Webster mentioned that AIT is at a crucial juncture and “it must place itself in a new role that both respects its distinguished origins and alumni and that meets the needs of the coming generations.” AIT President Prof. Worsak Kanok-Nukulchai stated that AIT should position itself on its niche and exclusive uniqueness, so that it can take full advantage of the blue ocean, i.e., an uncontested market space.

AIT has signed a Memorandum of Agreement (MoA) with the South Asian Institute of Technology and Medicine MoA signing with SAITM. (SAITM), Sri Lanka, to launch a Collaborative International Master’s and Diploma Program.

AIT has signed two Memoranda of Understanding with Northwestern Polytechnical University (NPU), and Xidian University, both based in Xi’an in Shaanxi Province, People’s Republic of China.

The Master’s program will be conducted in two stages, with the students studying spending two semesters each at AIT and SAITM; with the thesis defence and graduation being held at AIT. An alternative distance learning module will also be offered to students. The MoA signing ceremony was held in Sri Lanka on 19 October 2016. Chairman Dr. Neville Fernando and Dean Prof. Sisuru Sendanayake represented SAITM; while Dean Prof. Voratas Kachitvichyanukul, Dr. Matthew N Dailey, and Mr. Sanjeev Jayasinghe represented AIT. NOVEMBER 2016

agement. Rehan, Sobia and Tooba are doctoral students, while the other students are pursuing a Master’s program at AIT.

November 2016 edition of the monthly newsletter of the Asian Institute of Technology (AIT).

November 2016 edition of the monthly newsletter of the Asian Institute of Technology (AIT).